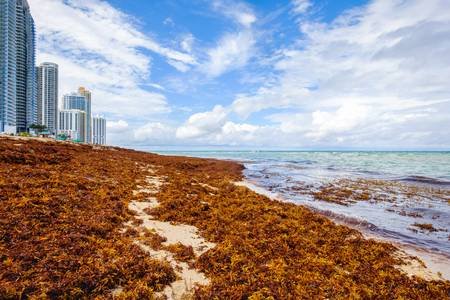 We put up with a lot living in Miami. The humidity. The road rage. The mosquitoes. The stupidity. But we always had our ocean. A respite from the heat, from the stresses of the modern world. The clear, calm waters that gave us a sense of defensive superiority when spotting a world traveling acquaintance’s Instagram feed.

Pfft, you might be in some exotic locale, but our beach is nicer than where ever you are.

This summer something changed. Planks of seaweed started washing ashore. Seaweed is a constant of coastal living, but not of this quantity. Islands of the stuff drifted in. Sargassum, it was called. An old lifeguard tried convincing me that it was a sign the ocean was healthy, that it was a harmless nuisance. I tried my best to believe her. I’d still spend my ninety-five degree afternoons wading through a few yards of the stuff to get to that peaceful sea. Past the seaweed the only noises you could hear were the sounds of waves and the laughter of other beachgoers hopping through the muck.

But now we are told there is a new danger to the best part of our way of living. Red Tide. An algae in the sea that poisons all that come in contact with it. On a day trip to the Gulf Coast this summer I caught a glimpse and a whiff of it. It left a stench in the air that had them closing off the beach. Even worse were the pictures of dead sea life washing into shore suffering from contact with the Red Tide. Dead crabs, dead manatee, dead turtles. All because industries can’t help themselves from polluting.

Like too many of us I was willing to ignore a problem that didn’t directly affect me. But this October Red Tide has come to the Atlantic. Our precious ocean is poisoned. Even scarier Red Tide supposedly affects the air we breathe with those with respiratory problems particularly affected.

I already miss the summer of seaweed.