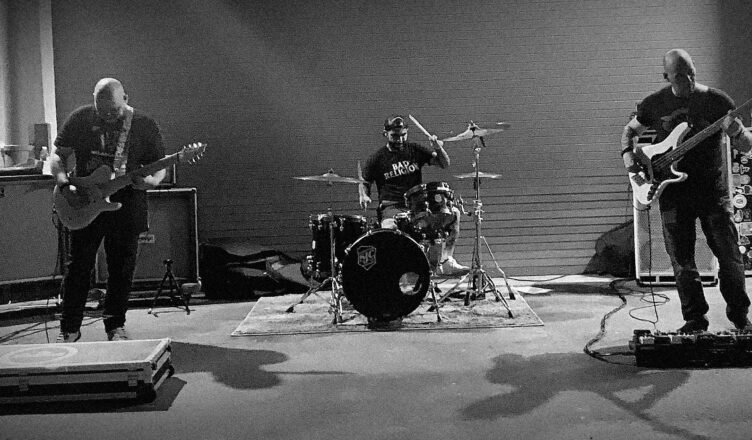 It’s a sunset bike ride during the green explosion  And after the show we share a smile and sink like a stone. There’s always beyond the stage to share. Intense waves of elegant melodies. And after you could’ve talked and I wouldn’t have cared – outside sounds are drowned out – so what do we care. I can barely see a flaw in the flow and down below the low tones of the 8 tens. It’s a 1,2,3… and go, let me introduce you to SUMO and its members Amado Ventura, Alex De Renzis, and Chris Salazar.

Why the name Sumo?

Chris: Well I’ve wanted to use that name for a long time. In my previous band (Vidavox) I brought it up while we were looking for names. We decided not to use it because it was used by another band. Fast forward a couple years later and I felt the name fit for this bands sound. The whole sumo wrestling thing is a mixture of really beautiful traditional elements, music, wardrobe, and spectacle. Then you mix that with the actual sumo and wrestling. large, powerful, and at times violent and ugly to some. I found that dichotomy really fit our sound. It’s something that at least for me is very important to have in music. A great sense dynamism. It’s something that stuck with me ever since I got into bands like the Pixies when I was younger.

Alex: Always found the choice to name the band Sumo interesting, considering they were a very well known band from Argentina. Being that I’m actually from Argentina as well, now I find it kinda cool that we get to share the name with such a great and influential band.

Chris: when it comes to practice we share a space with several other bands. It helps keep the rent low and instead of renting a space hourly we get to keep our stuff there. As for writing songs we all collaborate. Most of the time we have a simple idea, something very basic but with a hook. Me and Amado start working it into more of a structure. Once we have that we bring it to Alex and we finalize everything. During every step things change specifically when we add percussion. Whole new ideas can come when you add a beat and a rhythm to something.

Amado: Chris brings the jangles and the pretty stuff. I tend to bring the chaos. Alex brings the stability and glue to that and then we swap those responsibilities (sometimes multiple times in the same song).

Alex: What these guys said. One thing I’ll add is that the process is long. Which isn’t a bad thing. We really try and make sure we complement each other, and that we are not stepping on each other’s toes. Example, if Amado or Chris are playing a busy riff, I try and keep the drum parts extra simple.

If you can have a guest musician play with you who would it be?

Chris: I’d like to jam with a multi-instrumentalist. Tom Jenkinson, Jim O’rourke, Prince.

Alex: Another dead guy for me- Jeff Buckley.


Can you talk about your most current release/record?

Chris: Our last record “TWO” was a cool “quarantine” recording experience. We got to record with Jonathan Nuñez at his studio Artillery Sound. It was special for me cuz I knew going in we would have a lot of gear to mess with. And during a time when no-one was able to play out it came as a relief for us musically. Plus I got to use my Kiesel 8 string guitars on it. Guitar wise, the album has a more spacey surfy atmosphere on one end and a more aggressive attack on the other plus everything in between. If you like reverb drenched cleans, gritty overdriven guitars, and thick booming distortion I think you’d dig it. Not to mention the bass and percussion too.

Amado: TWO definitely feels more like its own breathing thing, not that ONE didn’t have that, but I think we managed to capture everything organically in that room (first time I haven’t used a DI and just mics in maybe 25 or more years). It’s most obvious on the vinyl release with the difference between side A and side B, which just worked out naturally since we weren’t sequencing it with that in mind.

Alex: “Two” is special for me, considering most of the drum parts on “One” weren’t written by me. I added and tweaked stuff but for the most part kept things as is. The song “Ton” on that album was all me, however. But back to “Two”. I had a lot of fun with this album. I went the “less is more” route. I’ve always been a pretty busy drummer and decided to keep things simple and really left room for the instruments to breathe and capture that spacey, big sound.

Tell us about your next album. When can we expect it?

Amado: We’re only a few songs deep into the process at the moment and nowhere near demoing them yet. If I had to guess on a timeline, though, I’d put it around late summer to early fall of 2023, which seems to be our natural timeline for streaming and, depending on the planet whenever it is that we’re done mastering, a few months after that for the vinyl release (unless we can get a decent release date for it and match it with streaming release dates).

Chris: I have a very nostalgic thing for Cindy Lauper.

Chris: I was basically raised here in Miami, but I was born in Santiago Chile.

Amado: I am a meat popsicle.

Alex: Humans first evolved in Africa, and much of human evolution occurred on that continent. The fossils of early humans who lived between 6 and 2 million years ago come entirely from Africa. Most scientists currently recognize some 15 to 20 different species of early humans.

Do you have a video coming out?

Chris: I got an idea for a video for our song “Antiope”. Just waiting to have a little money for it. We do have one video for “NGC123” our first album though.

Chris: the legit first album I ever bought with my own money was And Justice for All by Metallica on cassette. That same day my mom threw it away cause she thought it was evil or something. Which then I immediately went back to specs and stole it. Sorry mom. Your fault though.

Amado: These were thanks to birthday money,… it’s a tie between Ornette Coleman’s The Shape of Jazz To Come and The Ghostbusters Original Soundtrack. Both were bought the same day at the infamous Miami Depot in 1984.

Alex: Guns N’ Roses – Use Your Illusion I and II

Anything else you want to tell me or provide to include into this?

Chris: Any bands out there that would like to play a show with us, or need a band to fill a spot hit us up either on Insta or at hello@wearesumo.com. With so few venues left it’s getting really tough to get regular gigs, so hit us up!

Amado: Chris and I also started our own label, Rikishi Records, as a joke that turned into a very real thing. It really only exists to release our own stuff but we’ll also be putting out vinyl releases of some of our older bands as well,… one day.