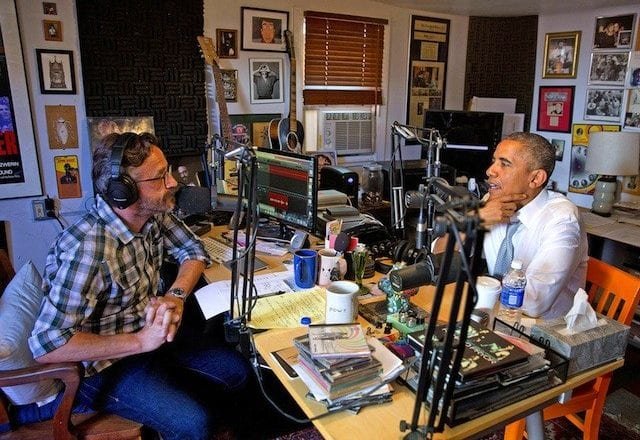 “Maybe one of the worse movies made in the past decade.” I came across this grammatically questionable headline for Sword of Trust minutes after finishing the film. I was on IMDb, looking up the film’s director and actors when I scrolled too far and ended up in the pit of despair that is their review section. The sentiment didn’t particularly surprise me. Sword of Trust is small and meandering, a comedy that invokes the dreaded “q” word: quirky. It’s niche, and niche usually results in angry missives like the above. But taken on its own terms, it’s rather enjoyable.

Though it has a screenplay credited to its director Lynn Shelton, along with Mike O’Brien, the movie is apparently improv-based. I feared this would lead to awkward pauses and meandering conversations from confused actors, but the cast is made up of pros who mostly skirt those issues and after a while deliver more than a couple of genuinely funny one-liners.

The story finds happy couple Cynthia and Mary coming to Birmingham, Alabama for an inheritance from Cynthia’s recently deceased grandfather. They’re expecting his house, but instead receive a sword. The grandfather’s prized possession, he believed the Civil War era antique was definitive proof that the South actually won the war.

Yeah, he wasn’t quite right in the head. Luckily, Cynthia isn’t on his wavelength. She tries to unload the sword at the nearest pawnshop, where they run into the shop’s curmudgeonly owner, Mel. Unsuccessful in convincing him of the sword’s supposed value, his interest is piqued when his conspiracy nut co-worker finds questionable people online more than willing to buy the artifact for good money. Soon the foursome band together to sell the sword to one of those dangerous individuals. A journey of self-discovery ensues that also questions why we sometimes believe the crazy things that we do.

Most of the movie features long conversations that take place in that pawnshop, a farm in the last act, and the back of a carpeted van without windows that ferries the protagonists between the two locations. This is par for the course for Shelton, who is associated with the mumblecore movement, a low-budget genre focusing on naturalistic dialogue and acting. And the dialogue, for the most part, is interesting here. Especially a monologue delivered by Marc Maron in the back of that windowless van, in which he soulfully recounts how he ended up in Birmingham and the endless off and on relationship with his currently ex-lover.

The main difference between this and Shelton’s earlier work is the setting…which doesn’t make that much of a difference. Her previous films (Humpday, Laggies) mostly took place in the Washington state area, but here we’re in the South. But outside of a couple of short montages of the surrounding rural areas set to the film’s soundtrack of spare rock guitar noodling, the movie could have been filmed just about anywhere. Some of these sequences add a little color and a hint of atmosphere, but not enough.

What elevates Sword of Trust is the cast and the charming, low-key humor.

The reliable Toby Huss stands out again in a scenery-chewing bit as a tough country dandy. But the movie’s really a showcase for Marc Maron. I’m late to the Maron party, only discovering him recently on Netflix’s fantastic GLOW. I used that as a springboard into his famous podcast, WTF with Marc Maron. He’s great again here as Mel. Gruff but sweet, he carries himself as if the weight of the world is on his shoulders and he’s just resigned himself to it. This leads to humorous deadpan reactions like when he’s threatened by screwdriver point and seems more concerned with whether or not the culprit stole the improvised weapon from him in the first place.

The low-key-ness works for the humor, but it doesn’t quite serve other aspects of the film. Conspiracy theories and why we might believe them are clearly on Shelton’s mind, but I didn’t notice any astute observations about either.

Sword of Truth isn’t mind-blowing, but it’s definitely not one of the “worse” movies of the year. The low-key humor lends it charm, and the cast is appealing. If you like smaller movies, and if you’re a Marc Maron fan especially, I’d recommend checking it out.