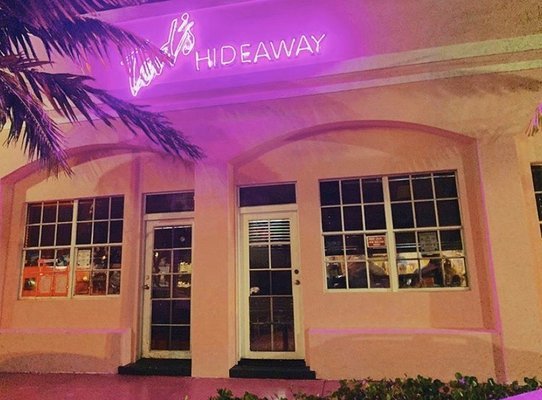 On the corner of 2nd St. and Collins Ave. there is a time machine called Ted’s Hideaway.

A concrete ledge provides seating for those stuck in between. The main entrance has the gravitational pull of a black hole but you are not sucked in, you fall in. Once that happens, you are suspended in time and have now become an observer like an astronaut peering from a porthole. Life outside goes on.

Pedestrian traffic and scooter gangs honk while you try and tell time from the shadow of a stop sign. Back inside the abyss, the crack of a cue ball breaks through the silence while nicotine incense swirls through the sky. Resignation wears a Vietnam Veteran’s cap and chain smokes Marlboro reds.

Where is the hostess?

She hangs on the wall and eats dollars for music while guest DJ’s are searching for nods. Time is a man made construct, I can prove it. Pull up a stool and I’ll show you how to pack an afternoon into an hour. You are inside of a vortex. You are in the eye of the storm, a cyclone of inebriation. Touchdowns are scored and three pointers are shot but the game remains the same. “I’ll have another”