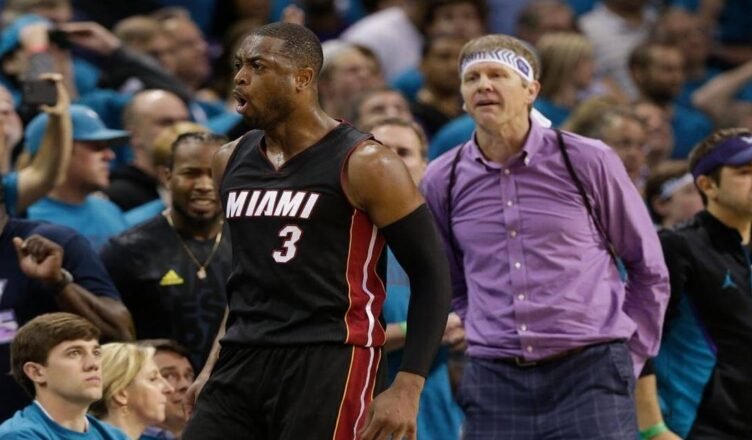 With the 2022 playoffs within spitting distance and the prospect of anything happening to the Miami Heat from winning their fourth championship to getting swept in the first round, we thought we’d take a look back at the ten most memorable games in Miami Heat playoff history.

Nobody was respecting a 34 year-old Dwyane Wade. Everyone was calling him washed up, after the Heat found themselves  down 3 games to 2 against the Charlotte Hornets. The loudest voice belonged to a giant fan sitting courtside in Charlotte wearing a ridiculous purple shirt and karate kid bandana. But Wade had a ten point fourth quarter including a couple surprise clutch three pointers and a spectacular block to clinch the game and eventually the series.

The Heat were oh so close to their first NBA Finals. Up three games to two against the Pistons and looking like world beaters. But at the end of Game 5 Wade injured his ribs forcing him to miss Game 6. He laced up for the decisive game 7 and scored 20 points coming off the bench, but neither that nor Shaq’s 27 points, nor a six point 4th quarter lead proved to be enough. The Heat went ice ice cold making only two baskets in the game’s last seven excruciating minutes of one of the worst losses in Miami Heat playoff history.

It was already a tense back and forth game. Then at the end of overtime with five seconds left the Celtics’ Jayson Tatum drove towards the basket for what appeared to be a game tying dunk. But Bam Adebayo said no sir, with a physics defying block.

The late ’90’s Knicks/Heat match-up was the most vicious rivalry the Heat have ever had and probably ever will have. There was so much hate between these two teams exemplified with this brouhaha. Game 4 was about to be tied two games a piece, when the Knicks’ Larry Johnson and the Heat’s Alonzo Mourning went nuts and threw punches at each other. Neither of these hulks could land a blow. In fact only Knicks coach Jeff Van Gundy made any contact grabbing on to Zo’s leg. But because of their attempts at fisticuffs, both players were suspended for the decisive Game 5. Without their most valuable player the Zo-less Heat got slaughtered in game 5 allowing the Knicks to move on to the next round.

It took a couple years, but the Heat finally looked like the team we expected when LeBron said the Heat would win “not one, not two, not three” championships. Heat fans thought it would be easy with the stacked team of LeBron, Bosh and Wade, but the first couple seasons were a struggle. Never moreso than leading up to this game when the Heat were down three games to two on the brink of elimination to an inferior, elderly Boston Celtics.  But then LeBron made the game look easy with 45 points, 15 rebounds, barely missing a shot as the Heat were on their way to their second ever championship season.

The game was over. The Heat were up by double digits with minutes left to bring the series back to three games to two with the Knicks having a chance to close out the series at home. Then the craziest series of events I’ve ever seen in playoff basketball broke out. Knick Charlie Ward tried to take out Miami’s Heat’s PJ Brown’s knees. Brown took exception to it and threw Ward into the stands. A melee broke out, but Brown was the only Heat player to get suspended. All the Knicks’ stars rushed off the bench and due to a technicality of players not being allowed to step on the court during an altercation they were all suspended. The Heat took advantage of the absences and knocked out the Knicks to make their first ever Eastern Conference Finals.

2020 was a rough year. Everything was shut down, everyone was out of work and it wasn’t considered safe to be near anyone. So that year’s Miami Heat team earned a special place in my heart. That team played like every possession was a matter of life and death.  No player embodied that more than Jimmy Butler. Missing his two most talented teammates in Bam Adebayo and Goran Dragic, Butler put the team on his back to the point of exhaustion playing 47 out of 48 minutes. 35 points, 12 rebounds, and 11 assists was enough to stave off elimination for at least one game and give Heat fans hope that as bad as things looked, maybe with some heart and grit everything would turn out ok after all.

In the modern NBA 79 points is a weak scoring output through three quarters. But in 1999 that’s all the points the Heat would have needed to beat the hated New York Knicks. The Heat were up 77-76 with 4.5 seconds left in the fourth quarter of a winner takes all Game 5. All they needed was one stop. But  Allan Houston who had only scored ten points to that point decided to accept the luckiest bounce in NBA history. He threw a floater that clanked on the front of the rim, bounced high in the air and by the time it landed through the net there were only .8 seconds left for the Heat to attempt a desperation three. Knicks fans celebrated all the way through a  surprise trip to the Finals. Heat fans spent the summer crying.

Down two games to none and behind by eleven points with under six minutes to go, Coach Pat Riley called time out. Instead of drawing up a play, he wrote the word “SEASON” on his marker board. Whether it was coincidence or the impetus the Heat needed they went on a run for the ages. Closing out the game on a 22-7 run with 42 total points by Dwyane Wade, the Heat won that game and three more to boot to secure the city’s first ever basketball championship.

Like there was any debate? No team had been as close to losing an NBA Finals as the 2013 Miami Heat only to come back to win it. Down three games to two, and down five points with only 28 seconds left it seemed the Spurs had clinched their fifth NBA championship. But then the Heat’s LeBron James made a three pointer to cut the deficit to two. The Heat fouled the Spurs’ Kawhal Leonard who missed one of his two free throws. The Heat had one more chance (or actually two more chances) and made the most of them. As announcer Mike Breen called it, “James catches, puts up a 3, won’t go. Rebound Bosh. Back out to Allen. His 3-pointer. Bang!” The Heat beat up the Spurs in overtime and then won Game 7 for their third (and hopefully not last) championship.