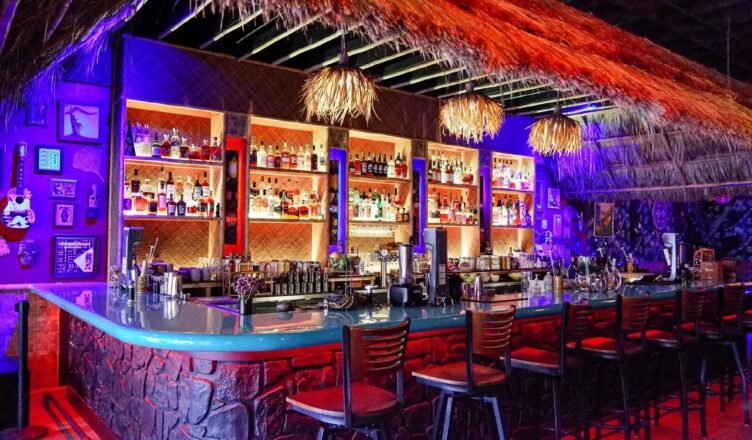 Rick Sarille and his partners in the Homecookin’ Hospitality Group, the brain trust behind local lounges Foxhole, Drunken Dragon, and rácket, opened Casa Tiki on Calle Ocho shortly before coronavirus changed the world. The hideaway invites guests to escape from their everyday reality to this tropical oasis in the heart of Little Havana. Casa Tiki is open Wednesday to Saturday, 5 p.m. to 3 a.m., and hosts a happy hour on each of those nights from 5 to 8.

We asked Sarille, who serves as the lounge’s director of nightlife, a series of questions about the joint recently – here are his replies:

What made the Homecookin’ Hospitality Group want to open Casa Tiki?

Rick Sarille: Given the landscape of Miami, we saw an opening for a smaller, more intimate venue. Little Havana is a very multicultural hub, a convergence of a lot of different people, and the arts are playing a big factor into it. It is an up and coming, growing area that had a void for a different kind of bar and a different kind of nightlife spot, and we just wanted to add to the diversity.

What inspired the Polynesian theme?

There is a huge Tiki culture that we felt we needed to tap into, and that Miami hadn’t really seen. So we got with a bunch of our mixologists from rácket, and we got with some other people in the industry, and zeroed in on the bar menu and the décor. We worked to bring light to more craft cocktails, the whole Tiki culture with rums and exotic mixes, and just bringing flavors and incorporating the Polynesian islands with a little Latin flair.

We felt like it was close enough to Brickell and close enough to the Gables, and equidistant to Coconut Grove. 17th avenue is a very popular and busy street leading all the way over to Marlins (now LoanDepot) Park, which used to be the Orange Bowl. So we felt it was really centrally located in an up and coming area, and an area that is still forecasted for extreme growth.

What is your educational and professional background?

I was born and raised here in Miami and am a college graduate from Wagner College in Staten Island, NY, where I played running back for the Division 1 football program. I was a two-time Associated Press All-American who was inducted into my college’s Hall of Fame in 2014, and my high school’s Hall of Fame in 2016. After college I went to play two seasons for a professional team in Milan, Italy, where we turned it around and won every game the first season, but lost in the playoffs, and the following year, we won the championship. It was a great experience, I learned a new language, toured a new country, and got to experience life in Europe. Afterwards, I returned home and began working in marketing. I had been doing parties with Smack and doing parties independently, as well as working for the Opium group. I also worked with the CONCACAF (The Confederation of North, Central America and Caribbean Association Football) putting events together for soccer tournaments, national teams, and professional clubs, and so my background has been very event driven.

Tell our readers a bit about the Homecookin Hospitality Group?

Our partners have studied at the school of hard knocks, growing up and living in Miami and New York. We’ve all come from a background working in nightclubs in Miami dating back to the 90s. We come from all different walks of life and from different areas. Angel (Febres) is from Puerto Rico but grew up in Hialeah. Conrad (Gomez) grew up in New York, moved to Miami in the early 90s, and was working at Liquid back in the day with Chris Paciello. Naven (Chatani) had been going to school in the Tampa area, and his background was also nightlife. He was working with the Opium group for a while then became one of the main guys at the W Hotel. Those are the senior partners, but there are also a group of junior partners. Besides myself, another partner is Tony Garcia, who has been in nightlife in Miami as a DJ (DJ Tony G) and also taking over different parties. He created NFA which stands for No Fucking Around, which had a big movement in the 90s as well, including different clothing brands. So, we try to give people different options, not just the nightclub option, but we want to bring that into a smaller more intimate bar setting.

What are your hopes for the spot?

We want to add to the culture that’s already established on the block, to provide a different outlet for people to listen to live music in. We have an excellent stage, and a great sound system that people can really sit down and focus on and enjoy everything from a live show by a local band, to a comedy set. To a tap into the culture of what Miami has to offer. There’s a lot of bars in Miami, nightclubs that are very driven by the music, but also so much electronic music and DJs. There are all sorts of homegrown artists who we need to pay more attention to, and really show them the love they deserve. Given our venue and space and having such a great stage and set up, the focus is live music and local talent. We want to create an energy within the space that’s lively, that’s upbeat and makes people want to dance. We all focus on Miamians and not so much the transient Miami Beach crowd, but focus on the people who live here, and grew up here. For those visiting here, Casa Tiki hopes to get them to feel the essence of what Miami really is, not what they see on South Beach.

Have you ever been to Hawaii?

I have not been to Hawaii, but Tony G has. He is an avid surfer and he’s been there to surf. He’s also travelled to Bali, Nicaragua, El Salvador, and Costa Rica, as well as California. So internationally speaking, surf culture and the surf community inspired us a lot.

What is the tastiest drink on the menu?

(Laughs) OK, wow. Our craft cocktails were all hand selected by our original manager Ivan, who is a mixologist, so every ingredient was thoroughly vetted and sought after, and put together to please your palate. We have different sensations, from texture to feel to flavors. But my favorite is the Vodou au Zonbi (Barbancourt White Rum, Barbancourt 3 Star 4 Year Old rum, Clairin “Vaval” rum, St. Elizabeth Allspice Dram, cinnamon syrup, vanilla syrup, Grenadine, lime juice, grapefruit juice, Angostura Bitters, absinthe). I like to go with a stronger drink, but we only recommend two per person. If we slip you a third, we might look the other way. (Laughs)

What other drinks would you recommend to guests?

We are typically more of a run-concentrated bar with our specialty craft cocktails, but I also enjoy a Mezcal. So I recommend the Surfer at a House Party, which has Gem & Bolt Joven Mezcal, Tanqueray gin, Jägermeister, sugar cane syrup, Pierre Ferr Dry Curacao, lime juice, pineapple juice, and rhubarb bitters. It has more of a smoky feel that’s balanced by the sugar cane, the bitters and pineapple juice.

Which is your favorite local band?

Oh man, that’s a tough one. (Laughs) We’re excited to hear Electric Piquete and see how they can rock the house, but I really enjoy what Suenalo does. They bring a lot of Afrobeats and are very diverse where they could hit you with some rap verses, as well as take you to Havana and hit you with some salsa. They really do a great job of mixing in a full band and make you get up off your chair and dance.

An all-new comedy night just launched on Wednesdays at Casa Tiki. The space is also available for private parties and special events. For more information, visit CasaTiki.com or call 786.817.2926.

Michael Mut is the co-founder / bass player / vocalist in Electric Piquete. When Casa Tiki hosts the award-winning Latin funk / fusionistas on Friday, September 10, 2021, beginning at 9 p.m., it will mark the band’s first performance in the area since the pandemic broke. No cover, 21 and over welcome. More details at ElectricPiquete.com.