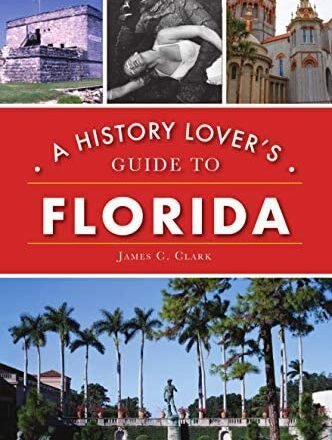 The below is an excerpt from James C. Clark’s book A History Lover’s Guide  to Florida. You can see James C. Clark  at the Miami Book Fair on Saturday, November 19, at 12 p.m. in the MAGIC screening room at building 8.

It is a simple question that children learn in school: How many original colonies were there? I bet you said 13. Right?

The correct answer is 14. Number 14 is Florida, and we don’t talk about it because while the other 13 colonies fought for independence from Britain, Florida remained loyal to King George.

It was so loyal that three signers of the Declaration of Independence were imprisoned in the old Spanish fort in St. Augustine, and British troops used Florida as a base.

Florida’s history has always been different. As the historian Michael Gannon pointed out, by the time the Pilgrims and Jamestown settlers arrived, St. Augustine was already undergoing urban renewal.

Because so many Floridians come from somewhere else, few know the state’s rich history. Here are ten things you might not know!

James C. Clark is a senior lecturer at the University of Central Florida, where he has taught since 1987. He is one of Florida’s leading historians, the author of 10 books, and the editor of a three-volume anthology of Florida literature.