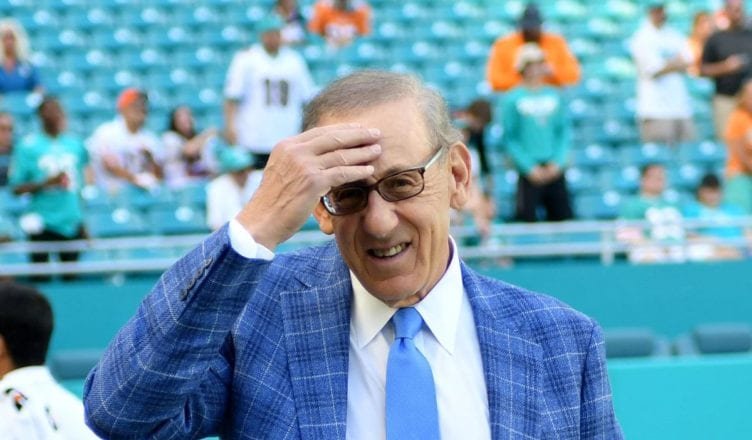 We’re a few months away from commemorating the ten year anniversary of a sad day in Miami Dolphins history. On January 20, 2009 Stephen Ross bought out Wayne Huizenga to become the majority owner of the Miami Dolphins. Since that day the once proud football team  has become the laughingstock of the NFL. In the past decade the franchise of Don Shula, Dan Marino and the perfect season has become forgettable at best and incompetent at worst. Here’s a painful look back at the decade of pain for Dolfans since Stephen Ross took over that will remind you that while you can fire a coach and trade a player, a fan base is stuck with an owner.

May 2009- One of Ross’ first moves was to sell shares of the team to celebrity owners like Serena Williams, Fergie from the Black Eyed Peas, Jennifer Lopez and worst of all Jimmy Buffett. Buffett was also given the assignment to replace the beloved Miami Dolphins #1 song with his awful “Fins”. Buffett without a touch of irony had the gall to say, “”I had no problem rewriting it for them because if you ever heard the original Dolphins fight song, it was just awful.”

March 2010 – Dolphins general manager Jeff Ireland asks future all-pro wide receiver Dez Bryant during a pre-draft interview if his mother was a prostitute. Ireland’s official statement on the matter released by the Dolphins said, “My job is to find out as much information as possible about a player that I’m considering drafting. Sometimes that leads to asking in-depth questions.”

October 2011- Even though Stephen Ross collects money from the University of Miami for playing games in his stadium, Ross decides to declare October 23, Gator Day when former University of Florida star Tim Tebow comes with the Denver Broncos to play the Miami Dolphins. The Dolphins were up 15-0 with six minutes left in the fourth quarter but cheered on by Gator fans Tim Tebow leads the Broncos to a miraculous 18-15 comeback victory over the winless hometown Dolphins.

April 2012- With the 8th pick in the NFL Draft, the Dolphins select quarterback Ryan Tannehill. Tannehill over the next seven years leads Miami to a mediocre 40-42 record. 67 picks later the Seattle Seahawks selected Russell Wilson who has had a 76-37 record along with a Super Bowl win.

November 2013- Bullygate. Offensive lineman Jonathan Martin goes AWOL after teammate Richie Incognito bullied him. After the incident which got national attention neither player played for the team again. Both players have found themselves in trouble with the law with mental health issues since then. As a public relation spin Ross organized an anti-bullying leadership council made up of famous former NFL players. This “leadership council” never once meets.

September 2015- Miami Dolphins cornerback Brent Grimes’ wife Miko Grimes is arrested at Dolphins Stadium with charges of disorderly conduct and resisting arrest. She then goes on to trash the team and their quarterback Ryan Tannehill on Twitter. The Dolphins release Grimes, Ross said because of his wife’s behavior. Grimes goes to Tampa Bay where he immediately has his best season.

January 2016- After a 6-10 season that is his seventh straight non-winning season in his regime, Ross declares the Dolphins are the best franchise in the NFL with one caveat. “If you look at our organization today, you see what we’ve done. From every aspect except the playing field, we’re probably the first class organization in the National Football League.” Except the playing field.

January 2017- The one bright spot. For the only time under Ross’ ownership the Dolphins finish a season with a winning record. As a reward they play a playoff game in Pittsburgh where the Steelers win 30-12.

October 2017- A video is leaked of Dolphins offensive line coach Chris Foerster snorting cocaine in his team office and professing his undying love to an exotic dancer whose privates he wants to snort lines off of.  Foerster resigns from his position before Stephen Ross gets confirmation from his lawyers that this is a fireable offense.

March 2018- Endearing himself to his hometown fans in an interview with the New York Daily News,  Ross states “Miami is a great city. It’s not a great sports town.”

July 2018- After Ross stated that he supported player protest an official Miami Dolphins document is leaked to the news that they will fine or suspend players who protest during the national anthem. No other team had such a policy leaked to the press. After backlash the player’s union Ross backs down. Dolphins wide receivers Kenny Stills and Albert Wilson become two of the very few players in the league who continue to kneel during the anthem in the 2018 season.