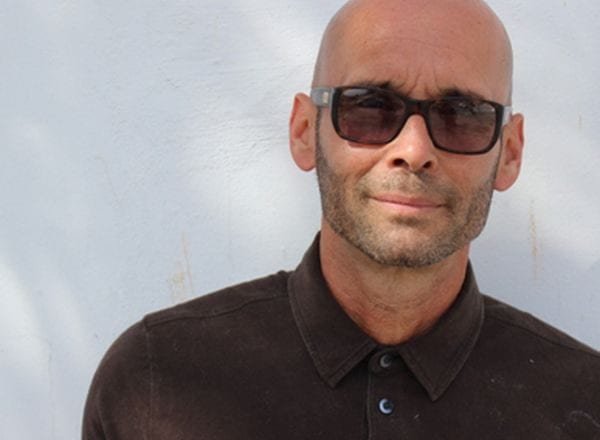 Teo Castellanos, is the author of Third Trinity, an innovative and exciting book published by Jitney Books. The book features three versions of the same story: a screenplay, short film and play.

It really is groundbreaking to see the same story told in three different formats. As far as we know, there is no such book in existence.

Castellanos is an actor/writer/director, who works in theater, film and television. He founded the Dance/Theater Company Teo Castellanos D-Projects in 2003. For the past twenty years he has toured solo and company works throughout the U.S., Europe, South America, China and the Caribbean.

On writing advice he got second hand from legendary playwright August Wilson:

” Tarell McCraney is like my son. He interned with August Wilson who told him, ‘listen to music when you write. get yourself an iPod.’ Tarell told me that story and I said I’m going to try that too. I wrote a company piece, Fat Boy  about American consumerism and waste and poverty. I listened to music as I wrote that piece for the rhythm of the text.”

Teo Castellanos on the inspiration behind Third Trinity

“I’ve had this story of my family bouncing in my head for a decade. I saw the story as a film. I wrote the screenplay and adapted it as a solo. It’s a story about my family, drug smuggling, political revolutionaries, and drug addiction. IT’s intense, heavy. The first piece in my life I decided not to tour. It’s about my brothers. The first draft I left myself out of it, but there was a hole missing so I wrote myself in. It’s about my two brothers who are actually my cousins that my mother adopted when her sister was murdered in New York City.”

Listen to our podcast to hear more about Teo’s literary working methods and busy artistic life. And read his book, Third Trinity.

And listen to the zen wizard’s awesome Jitney podcast below.