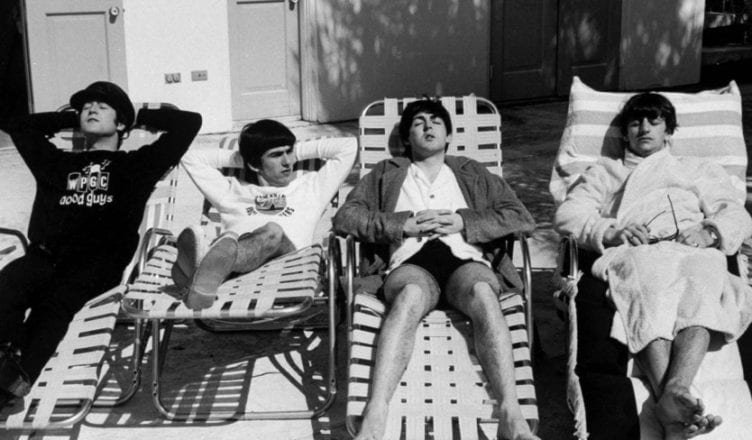 Editor’s Note: This is an excerpt from Pedro Medina León’s new book  TOUR: A Journey Through Miami’s Culture  where each chapter highlights an underknown aspect of Miami’s unique history.

The first Beatles album started playing in America at the end of 1963, under the name Beatlemania! With The Beatles, and in early 1964, their song “I Want to Hold your Hand” was at the top of the billboard charts. With The Beatles was the group’s second album, although in Europe, where they were already very popular, it came out under a different title. Their first foray into the United States came months later, with the A Ticket to Ride tour. They played in twenty-three cities and even Canada. Beatlemania! With The Beatles surfaced there before it did in the USA. This tour was remembered as the greatest Rock ‘ n Roll tour of all time and became the representation of the influx of British music into the American market –The British Invasion. After that, they did a few  smaller tours.

“A Ticket to Ride” was not the official landing song of the Beatles in North America. Their manager, Brian Epstein, organized a mini-tour in New York, Washington D.C. and Miami to study the public and media reaction. The concerts at Carnegie Hall in Manhattan, New York, and at the Coliseum Theater in DC, were massive successes. They were interviewed on the Ed Sullivan Show in New York, during prime time. The last stretch was reserved for Miami. Here they would offer a small performance at the hotel where they were staying, the Deauville, in Miami Beach, also as part of the Ed Sullivan Show. Both episodes of the Ed Sullivan Show reached a total of 150 million viewers.

The Liverpool quartet landed in Miami on Sunday, February 13th, on a simple domestic commercial flight. More than five thousand people were waiting for them at Miami International Airport, Concourse No. 3. The room was overcrowded and several of the windows were broken. Some attendants suffered physical damage and asphyxiation. The Beatles were not expecting this massive welcome, as Paul McCartney told journalist Larry King. Mr. King was the only American reporter invited to cover the entire A Ticket to Ride tour. Neither the press nor the police had expected the welcome. But at that time, these four 20-something-year-old childish looking guys with disheveled hair, not yet popular in the local mainstream, arrived with an anti-war and anti-racial segregation message. The United States was going through a critical stage in this regard, nourished by the counterculture youth. It is not a coincidence that “A Ticket to Ride” was the song that opened the tour in this city, as their way of protesting war actions in Vietnam. Here, in the Bohemian neighborhood of Coconut Grove, in Peacock Park, rose a community similar to a “little San Francisco” one, as previously mentioned, was covered by a marijuana cloud, long manes, wispy beards, guitars and drums. The nation, on the other hand, was mourning President Kennedy´s assassination, which took place during November 1963, and the youth fully identified with the band’s message.

Apart from the small performance of only 6 songs, and a few official dinners, the Beatles spent their time in the pools and the ocean, staying in direct contact with the huge number of fans that constantly asked for autographs – therefore the many “I met the Beatles in person” anecdotes in Miami. The city was caught in the heat of the John Lennon, George Harrison, Paul McCartney and Ringo Star fever. The boys, as they were called in inner circles, took boat rides, drank cocktails, reveled in the bikinis, toured the city and visited Muhammad Ali who was training at the Fifth Street Gym on Alton Rd, preparing for his fight against Sonny Liston at the Miami Convention Center. There Ali would be crowned World Champion, a triumph he could not celebrate in Miami Beach. Jim Crow´s laws of racial segregation forbade him to do so.

For these boys, who were used to the grey and cold of London, the tropics turned out to be a paradisiacal and dazzling place, as reflected today in collection of pictures hanging at the Betsy Hotel´s hallways. This confirmed to Epstein what his intuition was already saying: the boys were to return soon and with a greater commitment. The Beatles did not return to Miami, but to the Gator Bowl Stadium in Jacksonville, with their A Ticket to Ride tour, under the condition that African Americans could attend, since they were originally not allowed.

Set list, Hotel Deauville Miami. February 16th, 1964
She Loves You
This Boy
All My Loving
I Saw Her Standing There
From Me to You
I Want to Hold Your Hand

Pedro Medina León is the author of TOUR: A Journey Through Miami’s Culture.

View all posts by Pedro Medina →