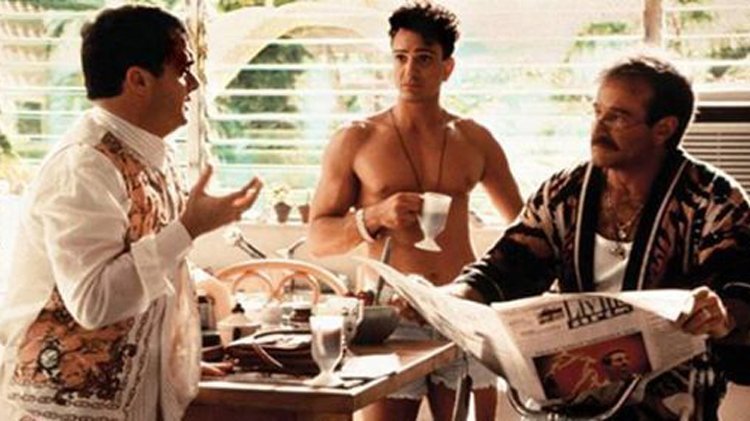 The Birdcage feels contradictory. On one hand, it gives us a rather progressive, diverse, and even heartwarming depiction of same-sex relationships, as well as an exciting view into the lives of drag queens. On the other hand, much of the film feels like it aged like milk, specifically the jokes done at the expense of people of color which can be tasteless at best and downright malicious at worst.

In all honesty, it feels like a comedy of its time. It’s equal parts forward thinking as well as backwards to today’s society.  It’s no wonder why Rotten Tomatoes ranks it fairly low in the listing of Miami-based movies. This is in no small part due to most of the dialogue from one the prominent characters in the movie, Kevin Keeley (Gene Hackman), a conservative senator whose jokes and dialogue revolves around his seeming disdain for minority groups.  In fact, the main conflict of the film centers around him not being able to accept the gay couple who may become his in-laws. I can see the argument for Gene Hackman’s character being purposely exaggerated to be ridiculed and satirized. However, a lot of his rants felt uncomfortable to hear, especially when he spouts lines like “underaged black whore” and “beige savage,” which hits a little too close to home, considering it was said towards a Latino illegal immigrant. I also find it problematic how his ideology is never fully challenged, especially his vision for a “white, moral America” which would undoubtedly include erasing those he considers as “other.”

I will say that there were moments within the film that made me feel warm, a lot of it due to the comedic yet tender dynamic between the film’s same-sex couple, Armand Goldman (Robin Lane) and Albert Goldman (Nathan Lane). In particular, the scene where Armand agrees to officially share everything with Albert. It reads as the culmination of their genuine love for each other, where Armand shows that he wants Albert to be a part of his life despite how his overdramatic displays of emotions can grate on his nerves.

Out of all the locations in South Florida, I think it’s fitting that it’s set in South Beach. The film plays into the festivity, exoticness, and vibrancy that the area is known for. Everyone’s sexuality is loudly displayed and paraded, overtly shown with one of the film’s main settings being a drag club and the background characters wearing revealing clothing like bikinis and even G-strings. It feels like a sort of haven for the queer community. It even got a surprise laugh out of me when they showed one of Miami’s little annoyances: the drawbridge being opened and stopping traffic for a small sailboat to pass leisurely through.

The Birdcage feels like for every step foward in the depiction of queer people in film, they took three steps back for other minorities. I believe this represents the zeitgeist that comedies like this existed in during the 90s.