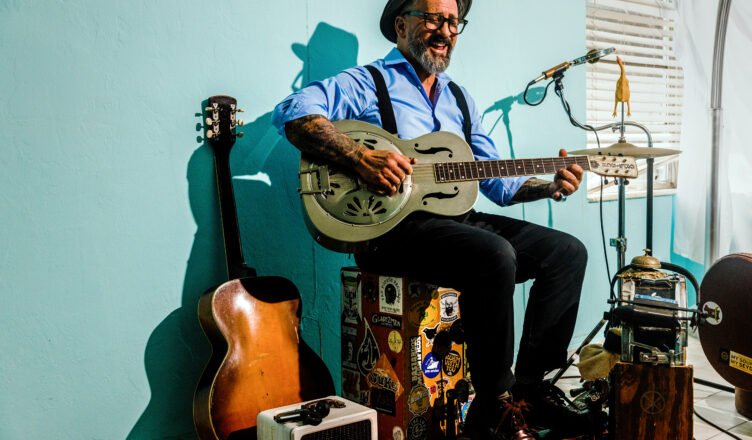 Juggerknot Theater is back in person with its most intimate project to date: The Blues Opera, a one-man, up-close and personal, autobiographical play by none other than Miami’s own Uncle Scotchy, Eric Garcia.

The Blues Opera is a poignant, unforgettable theatrical experience.

Mr. Garcia is one of our region’s most prolific musicians, multi-instrumentalists, cultural curators and storytellers. This performance is a magnum opus.

Set at an undisclosed location in Little Havana, Uncle Scotchy’s duplex house, you and 9 other audience members (the show is capped at 10) will meet at a public location and then walk over to the house with a guide. Ding, dong, the doorbell rings.  Uncle Scotchy answers and the immersive theater begins.

Without spoiling too much of this must-see play, you will be treated to at least fifteen interactive scenes, set in about six uniquely curated rooms in the house.

The Blues Opera really impresses in its willingness to vocalize and share the truth behind often taboo subjects.  Most families like to keep their secrets to themselves — this play challenges you to ask, maybe there’s another way.

What also make The Blues Opera impressive is that it’s a Juggerknot production. The set design, lighting, twists and turns, it’s all so good.

If you go, remember, this is immersive theater, it’s okay to walk around, to pick up a book or photo album and read through it. It’s part of the experience.

We’ve been to every in-person MMS production to date. The raw and sexy dance fest in Little Havana (2017) at the Tower Hotel, the MIMO carnival at the Gold Dust Hotel (2018), the funny, fast-paced Wynwood Stories (2019) at Wynwood Yard, and the meta noir-ish North Beach Stories (2020).

All of their previous plays were written by Juan C. Sanchez and all previous productions featured a huge cast and crew.

It is worth noting, The Blues Opera is not a Miami Motel Story.

This is a whole new ballgame and we couldn’t wait.

Eric Garcia is a Renaissance man, if nothing else.

Once a semi-pro tennis player, he’s now the lead singer of the groove band Juke, where he writes, sings and plays multiple instruments, most notably harmonica.

As a journalist, Eric’s written dozens of articles for Miami New Times, as well as our blog, including a scathing critique of local music venue owners and promotors.

As a storyteller, he launched and hosted a Moth-like weekly speaking event series, Uncle Scotchy’s Storytelling Extravaganza, a venue he used to develop and iron out the details of what would eventually become, The Blues Opera.

Eric’s been through some shit. He lost his mom and dad. Lost his girl. Lost his job during the pandemic. He was in a lonely dark place, suffering. Many were. But, rather than drowning in a bottle, he turned to the muses to honor his family with legacy through story. Not many get to honor their families the way Eric just has, but in a weird way, if you attend this event, it’ll feel like you’re honoring yours.

WHAT: THE BLUES OPERA presented by Juggerknot Theatre Company

WHERE: An undisclosed location in Little Havana.

Location unlocked with the purchase of your tickets

Tickets are on sale www.thebluesopera.com