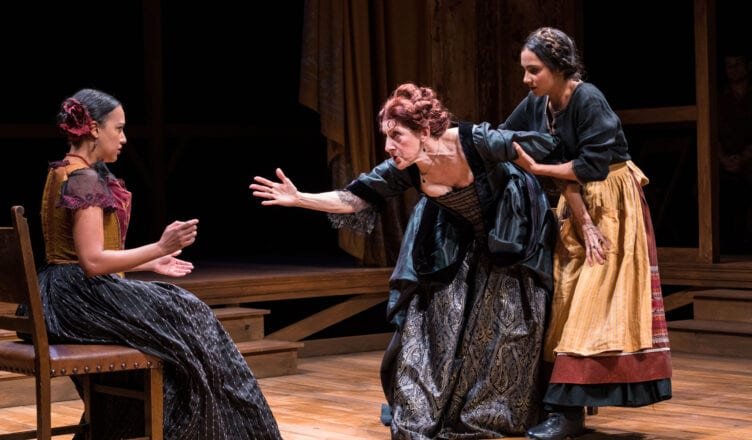 The Colony Theatre on Miami Beach is a gem of a building. From the terrazzo floor entrance to the Art Deco-colored tile in the bathrooms, it holds some of its original ambience. Seating and stage have been updated in a comfortable way that performances there come off fantastic. From seeing Marianne Faithfull singing Kurt Weill torch songs to Jane Birkin getting Arabesque to her former lover Serge Gainsbourg’s music, I have witnessed some lovely things there over the last few decades. Once during Art Basel Lou Reed featured his St. Ann’s live performance film of the Berlin album. When introducing the film he explained how he continually told the sound engineer, “It must be louder, like a concert” to the annoyance of some of the “art” patrons.

Nowadays the Miami New Drama runs their seasonal play series there and it is a fitting atmosphere. The theater company’s new season started this past weekend with an adaptation of Thornton Wilder’s Pulitzer Prize winning 1927 book The Bridge of San Luis Rey. Mr. Wilder was a novelist, playwright and even helped with the screenplay for Alfred Hitchcock’s film Shadow of a Doubt. As a playwright he was awarded two Pulitzer Prizes, one for the play Old Town, in which this adaptation gives a nod to through its narrator/stage manager.

As the theater scene goes in Miami,

my wife and I often notice we are the youngest folks in the audience. Twenty years ago that was not a big deal, but we are in our 50’s now. Granted we picked a Sunday matinee to go to, but walkers and power scooters beware! I remember Tracey Ullman had a one woman show at the Coconut Grove Playhouse in 1990 and when it went to Broadway she was on David Letterman. When Mr. Letterman asked how the Miami shows went, her response was hilarious. “Respirators and snoring” is the most I can remember her saying. Lucky enough the only person I saw fall asleep was on stage, but that was brilliantly part of the show.

This adaptation is by David Greenspan, a playwright, actor and director and winner of multiple Off-Broadway Obie Awards. Having both read the novel, my wife and I were very interested how this would turn out. Mr. Greenspan worked with director Ken Rus Schmoll at the Two River Theater in Red Bank, New Jersey for a 2018 production of this drama. For the Miami run he is directing it himself. At first he was working with a composer to make a musical piece out of the book, but settled on the screenplay in verse. Although I question this process and success of it, the actors deliver it ever so eloquently.

As the audience creaked to their seats ever so slowly, the actors one by one started wandering the stage. I loved this idea. You seemed to get familiar with the characters even before the play starts. The set design was minimal but fantastic. This story is a period piece from the 1700’s in Peru and the smell of fresh cut wood and antique stain was fitting. The costume design was also spot-on perfect. This story is of five souls who fall to their death from an old Incan bridge and that of a friar whom witness’ it and tries to clarify if this was God’s will or just by chance these souls have ended together. Absent from this adaption is the character of the friar, although I sense the audience becomes him.

The Bridge of San Luis Rey begins with David Greenspan

as the last character on stage leaping from the seats to become part announcer and also Uncle Pio, one of the unlucky ones. Miami-raised Broadway veteran Mary Lou Rosato is the only holdover from the New Jersey performance and is making her Miami return. She steals the show as Doña María, the lonely Marquesa de Montemayor. The rest of the cast are a mixture of South-Florida based actors and others from afar. Lindsey Corey as Doña Clara, Karen Stephens as Marde Marîa, Kevin Veloz (a recent New World Arts grad) as Manuel, and Carlos Orizondo in multiple roles, all have Florida roots. Jennette Dilone (a Columbia University grad) is Camila Pericole, Marcela Jabes (from Venezuela) is Pepita, and Austin Reed Alleman is Manuel’s twin Esteban. All are fabulous in this famous fable.

As a theater goer I would love to see younger folk make it out to a play. Short attention span is the theater of choice in the 21st Century. I hope that the New World School of the Arts has a program to get their students to this and other events. Also, The Miami-Dade Public Schools Drama Department would benefit from these quality performances.

In the introduction Mr. Greenspan states that if you have any fault with the production it lies solely on him since it is his adaption, screenwriting, production… My one observation is that occasionally the narrator finished the most important lines when another actor started them. Especially the most significant ending piece. Bravo to the great cast and production you have made of this classic story!