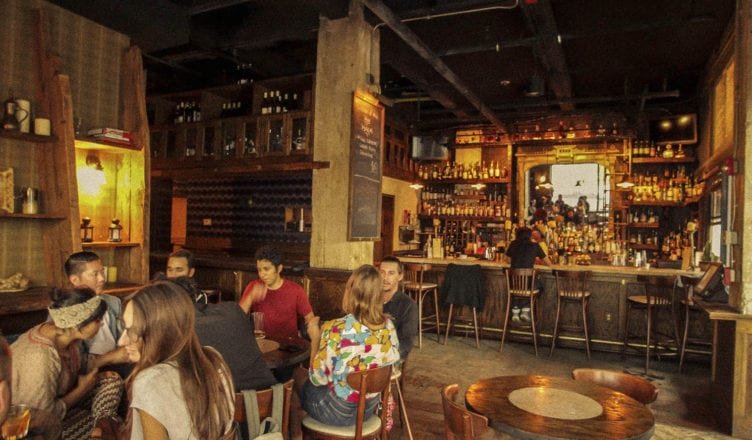 The Corner bar in Miami is one of our favorite joints and today they celebrate their 7th birthday.

About 8 or 9 years ago this really cool Miami architect (Christopher “Mac” Macleod) bought this really shitty building on the corner of Miami Ave and 11th Street. It was a mess. Just falling apart. The whole country was a mess, kinda. We were going through the Great Recession which meant a lot of us were living in apartments that eventually would be foreclosed upon.  The banks were going bankrupt. The insurance companies were bankrupt. America was fucked up but real estate was dirt cheap.

The Corner is Born

Mac bought a building with a simple vision: build a bar in Miami that carries the spirit of New Orleans. What does that mean? It means it would be all welcoming, funky, dark and dank, but intimate, personal, like a neighborhood bar. He would build it and call it The Corner.

I remember when he was waiting for the actual bar to arrive, it would be made of coral, which is what lives below us, six feet underground.  It’s why we don’t have basements in Miami. You can’t dig deep, you’ll hit coral rock or water (random Miami geology fact).

So the bar opened as planned.

It’s in a historic part of Miami (11th street) that actually has a 24 liquor license. Now, with that, just imagine what you could do.

So homeboy built it, and when you build it, ideally, they will come. And they did.

It didn’t take long for The Corner to create a unique vibe, thriving, intimate, affordable, dark, just like New Orleans in a way. Things happen at The Corner that aren’t always good. It’s open all night, in Overtown, it’s classy but seedy but more classy. Nothing has changed.

And with time comes growth and maturity and a certain sense of stability. And because of that, today, their 7th birthday — this is why we can comfortably say, and many will disagree, and that’s cool. But, it is what it is: The Corner is one of the best bars in Miami.