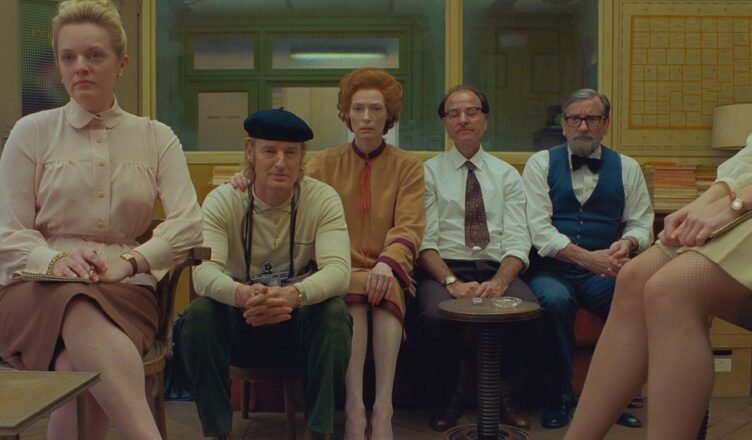 I suppose Wes Anderson making a movie based on a magazine isn’t that strange.

When Michael Jordan perfected the game of basketball, he went off to play baseball. When The Beatles perfected popular music, they split up. The film director Wes Anderson by my count has made three perfect movies and didn’t follow that up with a shift quite as dramatic.

Instead of filming another beautiful movie with a traditional narrative structure he decided to base his latest live action movie on a magazine.

Not a magazine article, but an actual magazine.

The French Dispatch is a love letter to the New Yorker. And it follows the format of that periodical. Just as a magazine has several articles that might not have any interweaving themes, so is The French Dispatch  comprised of three random stories. None of these tales have any common ground except that the three vignettes are supposed to be dramatizations of articles from the acclaimed fictional French Dispatch magazine.

The French Dispatch has many of the trademarks from previous Anderson masterpieces. It has the impeccably precious production design. It also has his charming cast of regulars like Bill Murray and Owen Wilson. But The French Dispatch doesn’t quite hit the heights of  his masterpieces The Royal Tenenbaums or The Grand Budapest Hotel.

Partly to blame is the attempt of throwing several completely different films into one moviegoing experience. I had the same problem a couple years ago with The Coen Brothers movie of many short movies The Ballad of Buster Scruggs. It’s hard to stay engaged when an hour into a movie a whole new random story begins.

Another problem is The French Dispatch tries to match the insane word count of a typical issue of The New Yorker which can be exhausting. I’m not sure if there is a website out there tabulating the statistic of most words of dialogue in a single movie, but I’m certain if there is this flick will be near the top of the list.

But these are nitpicks. Lesser Wes Anderson movies are still pretty awesome. While the magazine schtick is a bit of a failed experiment, this movie still has it’s moments of beauty that make it well worth seeing.

Perhaps it will play better at home when you can treat it like a magazine that you can put down and come back to when the mood arises.
-pic