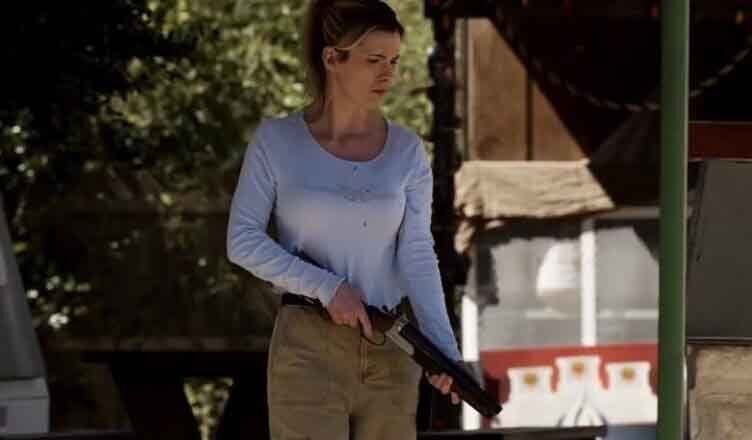 I started writing a review for the new movie The Hunt, a week ago with this introduction…

This is no time to go to the movies, as we are all seemingly starring in a film where nobody knows the ending. But if you are enough of a cinematic daredevil to risk the perils of coronavirus germs on your theater seat, The Hunt might be the movie for you.

One part violent exploitation B movie, another part  societal satire, it’s a shame because we’re in the midst of an outbreak that no one is going to see this movie.

In the week since I saw The Hunt at a press screening with only three other attendees, society has changed. With movie theaters closing for the foreseeable future, late comers seemingly lost their chance to see this movie. But with The Hunt becoming  available today to legally stream at home, I thought I should finish the review for a flick worth your time.

In all probability, even if COVID-19 didn’t enter our vocabulary, audiences would not have flocked to see The Hunt. It’s too violent. It’s too on the nose with its  satire. It’s too unsparing in cynicism with how stupid we as a society can be.  I wouldn’t put it exactly on the level of Fight Club or Idiocracy, but The Hunt shares enough of their brutally unsympathetic DNA that I could see its reputation following a similar arc. Forgotten and ignored in theaters and then over the years rising as a cult classic.

It’s better to go into this movie cold. So as far as a plot synopsis I’ll simply share The Hunt‘s vague IMDB blurb, “Twelve strangers wake up in a clearing. They don’t know where they are, or how they got there. They don’t know they’ve been chosen – for a very specific purpose – The Hunt.”

Written by Damon Lindelof and Nick Cuse, this is a worthy encore for their modern classic of a television series in Watchmen. The Hunt doesn’t have quite as many twists and revelations as that HBO series. But just like in Watchmen there are no dull moments in this lean script. Characters and plot only get enough screen time to service a point on how broken we as a people are and then it moves on to something else.

This is not a movie to watch with your multi-generational family. There is violence that will make some people suffer nightmares and others laughing fits.  But during these strange, uncertain times The Hunt is almost a nostalgic portrait of a simpler era.