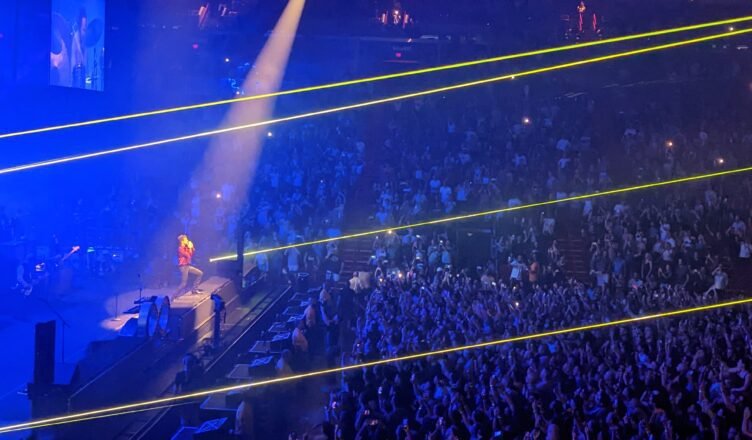 The Killers in Miami, baby. The FTX arena in Miami definitely came to life for the long awaited (postponed from Fall, 2020) show that shook about 20k on a balmy September, Tuesday night. Place was lit, without question.

But there’s something oddly weird about The Killers — they are a strange rock-n-roll band.

Yes. He is a rock star but he is also a bit wholesome, as are his crew.

And it’s far from a bad thing.

One wonders if it’s okay to use the Lord’s name in vein at The Killers gig..

Mind you, we (in Miami) live in Sodom and Gomorrah.

Our first reaction to The Killers show in Miami was damn, inflation. 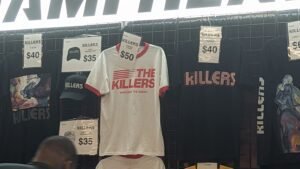 Our 2nd reaction was dang, we can’t believe we missed Johnny Marr (opening act, guitarist from The Smiths) playing a set partially of The Smiths songs..

Look at this, the place is packed AF, inside the arena, the 400 sections were filled, super sold-out, but oddly, the arena did not smell like weed and it appeared only 15 to 20 % of people had drinks in their hands.

This lead to a 4th reaction.

Are The Killers Are a Christian Band?

This is a legit question because there are a ton of Jesus / Devil / Light / Dark uplifting references throughout their lyrical catalog.

Brandon Flowers is a Mormon ((weird enough)) but they are not considered a Christian band (arguably).

Which prompted a 5th reaction.

Why are there so many sober-ish white people in Miami?

Which triggered a 6th and final reaction..

“Boy” is their new song.

It’s got an Erasure vibe.

And it’s currently crushing the charts (yet again for this band).

The Killers rock, and we all enjoyed the ride…

Reactions settled into joy and appreciation of an awesome show.

In an awesome setting, surrounded by awesome energy, as the night faded to black..