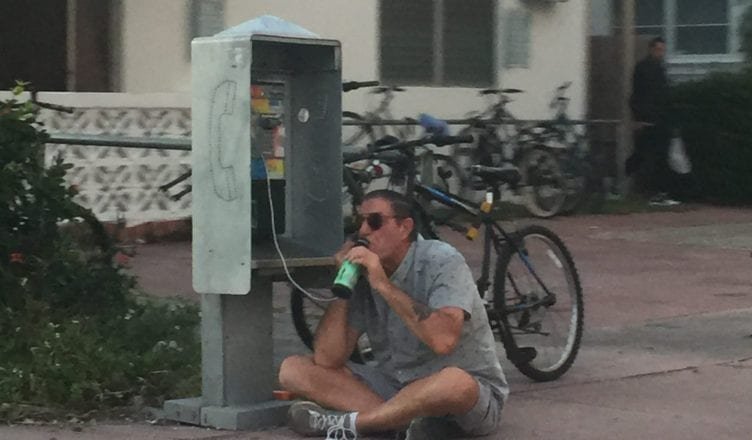 When my daughter was younger I would stroll her around the neighborhood introducing her to the world.  “That’s an iguana. That’s a sea gull. That’s a pay phone.”

“Back in the last millennium,” I’d tell her “before people communicated via text message. If you wanted to get a hold of someone that wasn’t in front of your face you’d have to call them on a telephone. And if you were outside your house and wanted to call somebody, you had to use a pay phone. It was a phone anyone could use, but you had to pay a quarter to talk.”

I’d answer but my mind would still be fixated on the fact there were still pay phones in random spots on South Beach. Were telegraphs still hanging around long after any one used them?

The surviving pay phone closest to my house is on the Northwest corner of 8th and Pennsylvania. It sits there like a time relic. I’d often walk by wondering with it only a block from Washington Avenue, how many drug deals were made on it during the South Beach heyday?

One day as I passed the pay phone, maybe a year ago, it was ringing, One of my great regrets in life is I didn’t pick it up.  Answering the call could have been the start of a great adventure. At the very least I figured I would have probably been the last person to ever talk on that pay phone.

But yesterday proved me wrong. I found the above gentleman sitting on the sidewalk having the grandest time talking on the phone. He looked like he was having so much fun sipping on his Arizona Iced Tea I must admit I got jealous. So I think I might be taking my future calls on the corner (outdoor) office.