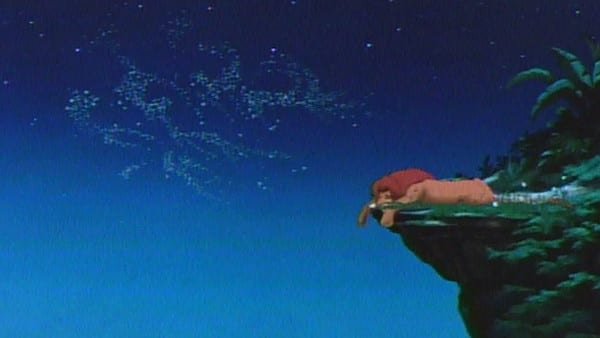 With the money Disney’s making off the live-action remakes of its animated films, it was only a matter of time before they put their Midas hands on The Lion King, the apex of their so-called Disney Renaissance. Oh, this new version will make a killing at the box office alright, but like its live-action predecessors, it will be quickly forgotten. Lethargic, listless, and utterly pointless, this Lion King is a whimper, not a roar.

Reviewing the Broadway version of The Lion King a couple of months back, I boiled the plot down to Hamlet with animals. I’ll stick with that description. You’ve probably seen this movies a million times and know the plot by heart already. If you haven’t, why would you be interested in a remake? This one’s strictly for nostalgists. The movie adheres so slavishly to the original, the only enjoyment comes from “Hey I remember that.” Though you’ll probably add the addendum “…and it was so much better before.”

Well, “live-action” is more accurate. With the new film’s reliance on CGI, it’s as animated as the original, just animated in a different way. Though taking place in the African savanna, the movie was filmed in a studio, utilizing green screen and computer generated animation. The visuals are ultra-realistic, and on a technical level, they are a marvel: digital sleight-of-hand creating photorealistic animals and locations. But is reality better than the vivid primary colors of the original?

And director John Favreau goes too far with his realist bent. The animals here, basically, behave purely like animals. That’s true of the hand-drawn original also, which did something similar, but only to a point. In the ’94 version, lions didn’t walk on two legs nor use their paws to hold objects, but they were animated with super-expressive faces. Here, the animals only make faces animals could make. This limitation is admirable until you realize they use the same dialogue and style of voice acting from the original. That means you have very human voices, very human emotions coming from the relatively impassive faces of animals, leading to a weird uncanny valley effect where the voices float over the images rather than being a part of them. It’s like a bunch of famous actors talking over National Geographic footage.

It doesn’t help that the voice work is weak. Animated movies usually have their actors record their dialogue separately, isolated in a sound booth. If done well, you’ll never notice. Here, you’ll notice. Something’s off. It’s like the animals are talking to themselves rather than part of a conversation. When they spoke all I could picture was an actor alone in a sound booth spitting into a microphone. It doesn’t help that some of the acting’s phoned in. Beyonce Knowles sounds like she’s reading a grocery list. Donald Glover sounds like he’s squeezing in a quick sesh before working on his next Childish Gambino album.

Favreau’s staging of memorable sequences from the original is equally dull and listless. I haven’t seen the original since ‘94, but I still vividly remember the stampede sequence. The dramatic angles that emphasized the height of the jutting, hilly terrain, that image of hundreds of wildebeest charging like a wave over the crest of a hill into the valley, that Hitchcockian zoom onto Simba’s terrified face as he sees the approaching horde, nothing like that is in the remake (remember, these animals can’t have terrified faces). The wildebeests here look real, but they seem to be trotting through a tiny valley more than charging. The breathtaking backdrop that sets the stage for a major plot point is just an afterthought here.

Watching The Lion King I noticed an oppressive silence.

No audience laughter, excitement, nothing. “They’re hating this,” I thought. But the rapturous applause and diligent fawning afterward proved otherwise. Weird. Eric Idle once told a story about a live Monty Python stage show he did that went disastrously until he realized the lack of laughter from the audience came from their familiarity with the famous routines, not from a disdain for them. They simply mouthed along, word for word, so enraptured by the familiar they weren’t actually reacting. I think that’s what happened with this new Lion King. The audience was so familiar with the original they just mimed along with the new one, watching to see if it hits all of the familiar beats. No need to react. Been there. Done that. And that’s all they wanted: the old with a new coat of paint. Me? I’m just fine with the old paint.