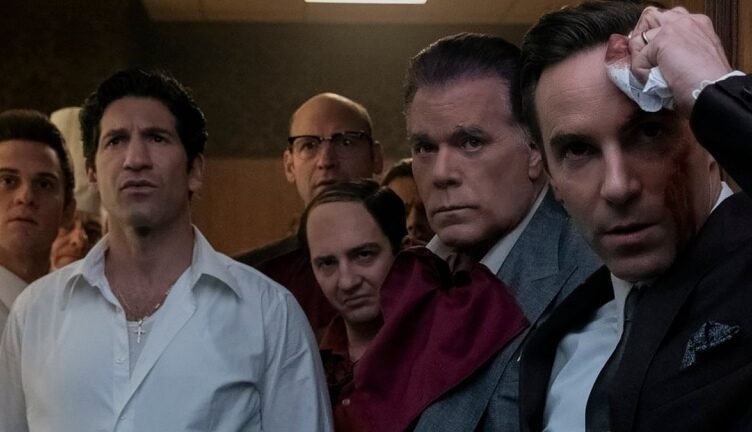 I went into the new movie, The Many Saints of Newark, excited but with tempered expectations. Many consider the show this film is a prequel of, The Sopranos, to be the greatest television drama ever. I consider the first season of The Sopranos to be exceptional, but as the seasons went on it grew to be repetitive.

It’s like David Chase watched Mad Men and said, “You know what could make The Sopranos better? Let’s set it in the 1960’s.”

Or perhaps he watched a few Marvel movies and decided to make a Sopranos Cinematic Universe filled with Easter eggs and little callbacks that only those with long memories or Sopranos obsessives would catch on to.

The movie starts off in 1967 where a ten year old Tony Soprano, is not yet a gangster. Rather he’s a cherubic kid with an Alfred E Neuman for President poster on his wall. Throughout the two hour movie  we see hints of Tony Soprano’s origin. But The Many Saints of Newark focuses more on Tony Soprano’s parents’ generation. We see his mother before bitterness completely consumed her. We meet his father and see where Tony’s temper came from. And Uncle Junior is as much of a schmuck as ever. Pretty much any character from the show who would have been alive from 1967 to 1974 makes a cameo.

But the protagonist of The Many Saints of Newark never appeared on The Sopranos.

He’s Dickie Moltisanti. Those who watched the show will learn in the opening scene that he’s Christopher’s father, but he’s portrayed as Tony’s spiritual forefather.

He’s a man who somewhere underneath all his sins has a desire to be good.

The Sopranos is considered the birth of anti-hero television, a show that has you rooting for a villain. These types of entertainments feature characters that you forgive for murdering, for adultery, for torture and all other kinds of wrongs that if they occurred to us, we’d be screaming for the death penalty. It’s not hard to figure out why you cheer for a villainous character  like Dickie. when he’s in a feature like The Many Saints of Newark that is filled with witty dialogue, exciting action scenes, and the occasional quote from Buddha.

It’s hard to make a prequel to a popular series or movie. The audience already knows the ending.  George Lucas ruined Star Wars with its prequels and I’ll never understand why they didn’t make The Hobbit before Lord of the Rings. But a well made prequel reminds us entertainment should be about the journey, not necessarily the destination. I’ve long considered Better Call Saul, the prequel to Breaking Bad, as the gold standard of prequels. With the release of The Many Saints of Newark, it now has company at the top.