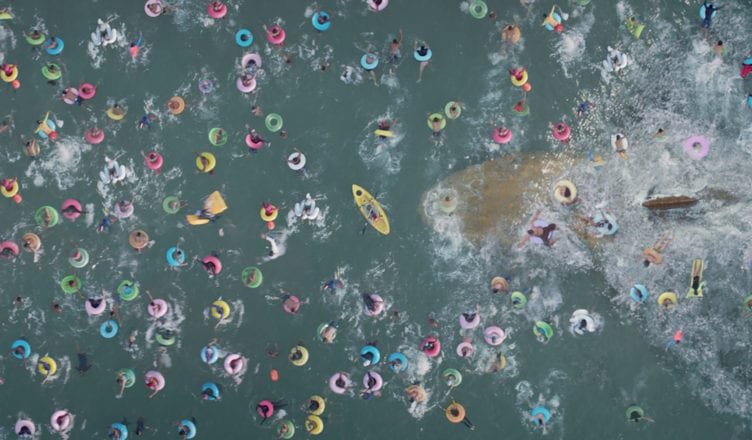 “The Meg” is a movie at odds with itself. It wants to be a self-aware, tongue-in-cheek monster movie, but it also wants to be an emotional…family film? An intriguing notion, but here it’s pulled off without finesse, resulting in a giant shark movie that lacks…ahem…bite.

The Meg has a plot. But it’s not great.

Jason Statham stars as Jonas Taylor, a rescue diver and captain who, in the film’s opening, leads an ill-fated expedition to rescue the crew of a sunken submarine. He swears a creature big and strong enough to crush the hull of the immense ship caused him to lose half his crew. He’s not believed.

Five years later, Jonas’ ex-wife Lori (Jessica McNamee), whose character goes no deeper than “Jonas’ ex-wife,” explores the Mariana Trench, the deepest point of the world’s oceans, at the behest of Suyin Zhang (Li Bingbing), an oceanographer working on a state of the art underwater research station, the Mana One, staffed by a rogues gallery of stereotypes.

Suyin theorizes the trench’s “floor” is actually a layer of cold water separating a completely different eco system underneath. Lori and her sub crew prove her theory correct, making it through and discovering this new eco system–which, sadly looks rather ho hum due to the film’s murky underwater cinematography and unimaginative special effects—and, unfortunately, also discover a megalodon, the prehistoric, giant shark of the title, which attacks their vehicle, leaving the crew stranded.

All of this, and the only reason Jonas’ ex-wife even exists in the movie, is pure motivation to bring Jonas back from exile, with his rescue attempt somehow leading to the megalodon’s escape…apparently. The relationship between the rescue and the shark’s escape is tenuous at best and a late movie plot-twist muddies that cause and effect even more. Logic is not the film’s strong point.

With the megalodon on the loose, Jonas and the C.O.S (crew of stereotypes) chase after the shark, trying to kill it before it reaches a populated area, all while Jonas and Suyin flirt with each other, their attraction made official only after she sees Jonas’ rock-hard abs (this is a Jason Statham movie, after all) early in the movie.

Does “The Meg” know what kind of movie it is?

The movie is directed by Jon Turteltaub, who has made Disney fare like “The Kid,” and both “National Treasure” movies. He’s a journeyman director, but his personality peeks through here, bringing a family-friendly-ish atmosphere to the movie. The characters seem to care about each other, and the director seems to care about the characters. Touchy feely me liked this. But it is anathema to what the movie is trying to be, what we expect when we hear the words “Giant Shark Movie.”

The dueling tones are best exemplified by the film’s finale, which takes place on a crowded beach in China. (Just how crowded is conveyed with neat overhead shots of countless, multi-colored innertubes, creating a giant, wavy rainbow floating in the ocean). This table setting invites one thing only, Carnage (yes with a capital “C.”). What we get instead is a lot of set-up and very little payoff. The shark chomps a bit and then is lured off by the heroic C.O.S.

All set-up and no pay-off?

Teasing an audience like this and then not committing to it tinkles directly on Anton Chekhov’s gun principle: if you show a gun in the first act, the famous Russian playwright theorized, it better be used by the second. If you’re going to show an ocean full of people, fodder for a giant shark swimming beneath them, they better become chum for that shark. But the movie wusses out on that front. The whole sequence ends before it begins, the director’s family-friendly tendencies not allowing him to go through with it.

There are some fun moments, though. Jonas being towed at high speed by a boat while the shark bears down on him is nicely shot and edited, and the actual finale is fun with a “Phantom Menace”-esque submarine chase and an actual, honest-to-goodness hand-to-hand (hand-to-fin? Mano-a-sharko?) showdown between Jason Statham and the shark. In that moment, the movie actually realizes, for a few seconds at least, its ambitions of ridiculous fun. But it’s too little, too late.

“The Meg” is entertaining enough to catch on a lazy Sunday afternoon on cable and be reasonably satisfied. But it lacks coherence and, worse, spectacle. The visual effects are convincing enough to bring the shark to life, but there’s no wonder to any of it. And if your main setting is a fancy research station, it’d be nice to have at least one major action sequence on it.

The movie ends with a title card that reads “fin.” While I groan-laughed at that joke, the movie just isn’t enough fun to earn that fin.

“The Meg” comes out nationwide Friday, August 10th, with early screenings starting August 9th at 7pm. Catch it at a theater near you. Or, you know, don’t.

This article was filed by Pavel Klein.

You can also check out his blog of filmic musings at Write Pavel Write.