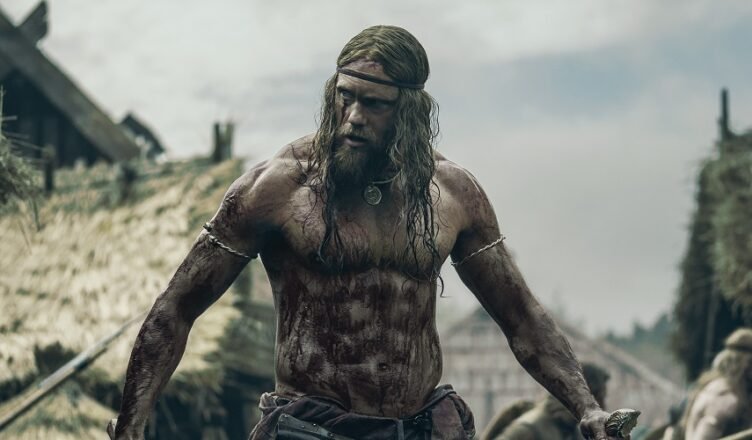 Mark my words, there will be a subset of the human race who declare The Northman as the greatest movie ever made. Depending on the day and my mood I might join in on that absurd claim.

If you loved Game of Thrones, but thought that TV show’s depiction of violence was too subtle, The Northman is your movie. If you have waited impatiently for a movie whose every frame could serve as the album cover for a 70’s prog rock band, The Northman is your flick. If however the sight of decapitations makes you queasy, avoid this movie like it was a sick man who takes off his mask to sneeze.

Seemingly based on the same Scandinavian story that inspired Shakespeare to write Hamlet, The Northman tells the tale of a young prince who seeks revenge on the uncle that murdered his father and married his mother. But it replaces existential dread with ultraviolence and iambic pentameter with lots of grunting.

The biggest influence on this movie for director Robert Eggers are the films of Mel Gibson. While after Leni Riefenstahl, Gibson is probably the last director you should admit to admiring in polite society, The Northman wears his influence on its sleeve. From the blood splattered green grassy hills reminiscent of Braveheart to the gruesome torture of Passion of the Christ to the lines of dialogue spoken in a foreign, ancient language ala Apocalypto, it extracts ten hours from Gibson’s oeuvre into two hour and fifteen lean minutes of vengeance.

Hopefully after The Northman wins all kind of acclaim Eggers can avoid being recorded spouting insane rants, so he can keep making splatterfests.

The Bad Guys is a perfectly fine cartoon movie that can distract your kids for an hour and a half. It might be the first kids movie influenced by Quentin Tarantino, as it features a quintet of villainous animals who pretend to be good so they can score one last heist. But The Bad Guys being an animated  Ocean’s Eleven  isn’t what was noteworthy about this flick.

Two other things stood out.

First and more shocking was they use the word “fart” in this movie. This seems like a gamechanger if cartoons can now use this word.  Screenwriters of children’s movies won’t have to work so hard to craft gags. They can now randomly use the word “fart” every fifteen minutes and they are guaranteed cheap laughs.

The second feature of this movie that keeps me up at night is that at the closing credits they show a scene featuring each cartoon character with the text claiming the voice actor portrayed the character. So it reads in large text “Sam Rockwell as Mr. Wolf” and “Awkwafina as Ms. Tarantula”.

Now this does not seem fair.

A team of animators works for years to render these characters, and instead a semi-famous actor who doesn’t even have to memorize their lines or put on make-up or clothes to record a few lines gets credit for bringing these characters to life?

The bigger question is why studios keep hiring big name or semi big name actors to voice their cartoons. While I’m not sure anyone goes to see a live-action movie because Sam Rockwell is in it, kids definitely don’t care. And parents will pay for their admission tickets regardless if Alec Baldwin does the voice of Boss Baby or if his less famous brother Stephen Baldwin does it.

I’m not sure why I’m so keen to help the multinational corporations that own the movie studios, but if they want to save a few $$$, drop the A-List stars in cartoons. You can hire random people at the unemployment office to do the voices just as long as they can say the word “fart” in a funny manner.