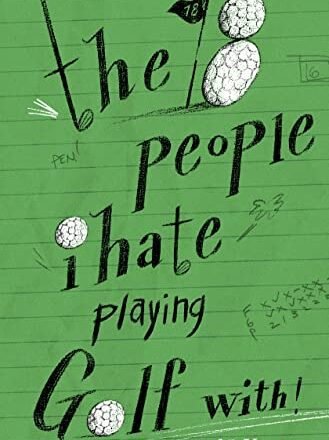 Editor’s Note: The below is an excerpt from Michael J. Urann’s new book, The 18 People I Hate Playing Golf With, available to purchase here.

I’d been dating Leah for five years. We met in college, moved to Los Angeles with our degrees in Media Arts, and set out to conquer Hollywood. Pro tip: It helps if you know people high up in Hollywood already. If you don’t, you’re hitting a blind tee shot into the wind to a 10-yard wide fairway with O.B. on both sides. In other words, good luck! She’d been an athlete her entire life and was recruited at two Big 10 schools to play softball while playing basketball in the winter. In her infinite wisdom, she decided to forego sports scholarships and pay her own tuition to Emerson College because she had wanted to write feature film scripts for as long as she could remember. I’ll be forever[1] thankful that she did, or we wouldn’t have met.

Working in Hollywood can be lonely. Everyone has an agenda. It makes your good friends into really good friends because finding new people to connect with here inevitably leads to too many nights reading their terrible scripts or attending shitty comedy shows only to find out later they were ‘Bringers”[2].

I had given up other sports after Little League. I was a decent pitcher but couldn’t hit at all. Golf was my thing, and I played every Saturday with my poker buddies but always felt guilty leaving her alone at home for six hours while I got my round in. After a couple of years, I decided that I should get her a set of clubs and some lessons.

Prowess at other sports doesn’t always translate to golf. It may give you a leg up athletically, but the golf swing is a lifelong struggle. Harv had told me years ago that he tried to teach Mom, and it was the “worst decision he ever made.”  I never found out why, but The Fabulous Judi never came across as someone who would like golf, so I just went with it.

Not wanting to repeat the same experience Harv had,  I decided was that it shouldn’t be me to teach her. I’m terrible at it. I can tell you when a decent player makes a bad swing without seeing the ball’s flight but crafting a swing from scratch is above my pay grade. It’s probably above yours, too, so please consult your local PGA Professional or risk sticking your friend, relative, spouse, or child with a catastrophic swing that they’ll spend the next 50 years trying and failing to correct.

Leah’s lessons went pretty well. She was coming across the ball and flaring shots right but almost always in play. My dreams of her softball skills producing a 100MPH swing speed and playing the Blue Tees with me went away somewhat quickly, but after a few months, she could play the forward tees and get around well enough not to make any list in this publication[3]. She made a birdie the second time we played a regulation length course on the 5th hole at DeBell G.C. in Burbank. She stiffed an 8 Iron to 6 inches; a proud moment I was glad to witness.

I genuinely liked playing golf with my wife. She wasn’t great, but I didn’t worry about her being bored at home. Eventually, she discovered Tae Kwon Do and stopped playing. It was too slow for her. She’s now a second-degree black belt who could fuck me up if necessary.

Don’t be scared of getting your spouse out there, gents. As long as your expectations are realistic and you’re not an asshole, you get to play golf instead of going on some godawful hike.

Every now and again, I’ll be paired with a twosome of a husband and wife when I’m playing solo or with one other guy. It’s not every time, but more often than not, the man will basically attempt to tell the woman what to do on every shot. It starts like this; the guy hits his tee shot, gets in the cart, and drives to the forward tee where the woman gets out. OK, fine so far[4].

Then, for some inexplicable reason, he gets out of the cart and walks over to the tee with her. Why? If I did this with a friend playing a forward tee, they’d look at me like I had three heads. He then watches her practice swing – often times instructing that another practice swing would help – before finally telling her to hit the ball. Sometimes, if she hits a poor shot, he will make the decision that she should hit another ball.

As of this writing, I’ve been with my wife for nineteen years. If at any point, for any reason, in any situation, I looked over her shoulder and took over the decision-making for her like that, I’d get murdered. So why do guys think it’s ok to do it on the golf course? Moreover, why in the hell do women put up with it? Have you ever watched a cringe-worthy moment on TV that you just have to look away from? That’s how I feel when I see a guy doing this. If you can’t let her play her own game, don’t play golf with her.

[1] Until she divorces me, but books live forever, right?

[2] ‘Bringer’ shows mean that the comedian buddy you have is only getting on stage if he coaxes enough unsuspecting friends to attend said show.

[3] She took too many practice swings, but don’t tell her I said that. Thanks.

[4] Well, sort of, it’d be better if the forward tee player walked ahead so they were ready to hit.

Michael Urann is a father, golfer, husband and entertainment producer...not necessarily in that order.