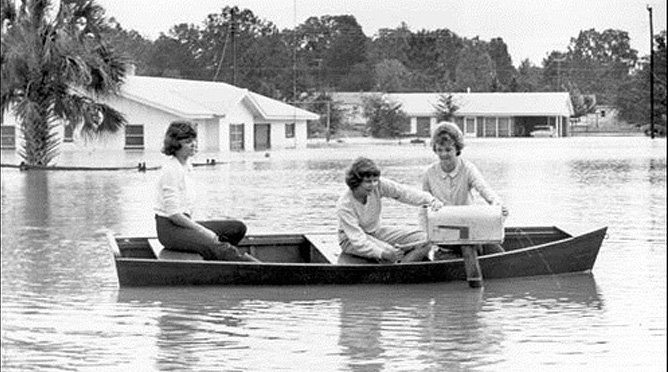 The rain this past weekend was out of control. On Friday the flooding in Downtown Miami from 11 inches of rain unleashed all kinds of chaos. There were stalled cars and late night partiers having to wade through thigh deep waters.

There were even videos of fish swimming around puddles in garage parking lots.

But this weekend wasn’t even close to the record for Miami rainfall over a 24 hour period. That happened all the way back in April 25, 1979. On that Wednesday the National Weather Service reported a 24-hour total of 16.21 inches in Miami. While there was no Twitter back then to record for posterity all the zaniness that lots of accumulated water might unleash, The New York Times reported that catfish were spotted swimming down Fort Lauderdale’s Andrews Avenue. Up in Boca Raton they received 18 inches of rain and hotel guests had to wade through the hotel lobby to get to their room.

In Plantation, the police were out in full force warning locals about the dangers of displaced rattlesnakes. The cops “warned parents to keep children indoors and out of the way of snakes routed from their hideaways”. Two snakebites being reported.

A report on the storm from the South Florida Water Management District thought the damage from the rainfall was no big deal. They gave themselves a pat on the back for how South Florida handled it.