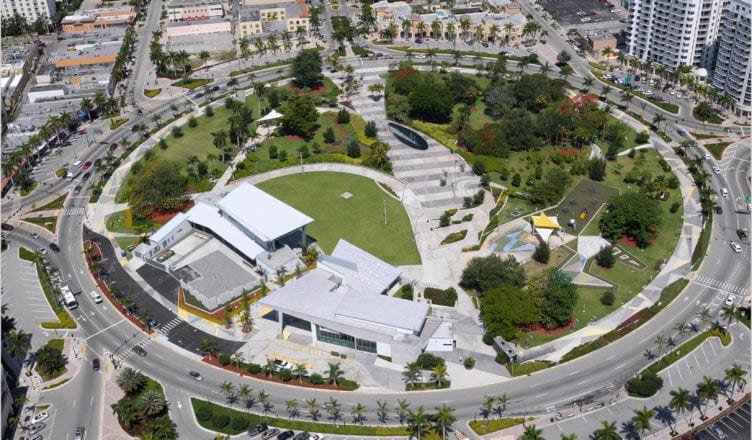 I’ve been known as the “unofficial mayor of Hollywood” for decades. With a family tree that goes back to the 1930’s in Hollywood, I’ve heard stories and witnessed Young Circle through many transitions. It was a sad day when the old Mimo-style bandshell was torn down a dozen years ago. Memories of the Hollywood Jazz Festival that brought the likes of Dizzy Gillespie and more linger in my head. For years the city has had problems actually getting the proper use out of the new stage. A gargantuan minimalist sort of paddleball court of a stage usually gobbles up small bands, and the sound can often ricochet around due to the building of taller and taller structures around the park. A few years back the Rhythm Foundation, a non-profit organization with decades of experience and connections, started filling the park with world-class acts from around the corners of the planet. Their first contract ended 3 years ago and after that the stage rarely had much going on.

In 2018 the Hollywood Community Redevelopment Agency finally came around to support a much-needed new concert series for the park, and multiple promotion companies bid for the contract. Lucky for us, the Rhythm Foundation won out again! They were really the only folks that could handle something like this and do it right. James Quinlan, RF’s founder, has put his heart into South Florida since the 1980’s with all types of concert promoting. The previous 3-year contract brought music from Europe, Latin America, the Caribbean and more. Hollywood ArtsPark is a regional park and invites folks from the tri-county area to enjoy. Mr. Quinlan and his team know how to find performers that will fill the stage, get folks to the park and make it sound wonderful.

They brought in thousands of attendees in their previous concert series, and kicked off the new series with two great performers, Chicano Batman then the Dirty Dozen Brass Band two weekends in a row in May, which drew crowds of 1,800 and 3,000, respectively. I’d say they are off to a great start! With this new 3-year contract of 4 shows a year, we are in for something special.

On Saturday June 15, the Rhythm Foundation presents Monsier Periné – a Colombian band with an Afro-Colombian gypsy jazz type feel. Traditional South American sounds mixed with a 1930’s Paris touch, but ever so modern. As always, to compliment the international act, the Rhythm Foundation brings in a well-known local act to grace the stage. For this event it is the Javier Garcia Trio.

On June 22, the legendary Chucho Valdés will perform Jazz Batå. This is a revisitation of an early 70’s trio of piano, acoustic bass and batå. The opening act will be the local Cortadito.

Doors/DJ are at 7 p.m., opening acts 8 p.m. and the main course is 9 p.m. The shows are rain or shine and free. Let’s hope the weather cooperates. I am already looking forward to the next series starting later this year!