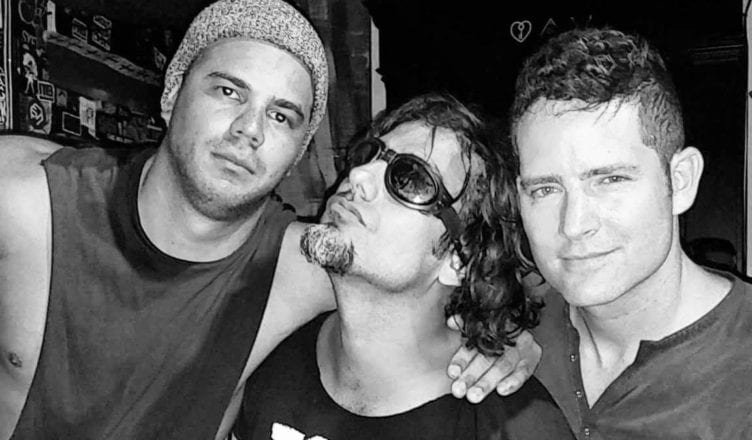 There’s a naked woman with a chainsaw trying to kill an unlimited horde of bloodthirsty zombies.She’s the star of the new The Rockadictos music video for the song “When The Day Is Over,” which is chopped up with the award winning independent horror movie Naked Zombie Girl.

For four years, the incarnation of the band that includes Javier, Pablo, and Jeff Rockadicto has been sweating it out in Miami dreaming of headline gigs at MSG. Here’s what drummer Jeff had to say about joining the band, writing the music, and keeping it powerful.


Sick video! Hell yeah!
Jeff Rockadicto: Thank you, thank you, we appreciate it.

The first line of the video is cool, “I can’t remember when I started to forget”. Who writes the music?
All the songs are a collaboration. Javier does most of the lyrics, but we write the songs together.

What is the story behind the song?
We don’t like to define it. It means something different to everyone.

What is Naked Zombie Girl?
Hahaha. So, Naked Zombie Girl is a short film by Rickey Bird from Hectic Films that won some awards at Screamfest that our video editor Miro intermixed with what I filmed of the band.

How did The Rockadictos famous interview with the naked interviewer Jenny Scordamaglia come about?
That was something Javier did. I seen it, but I wasn’t involved. But she looked good.

How did you end up joining The Rockadictos?

I moved from Virginia to California to Miami and had my younger brother visiting from out of town. He met Pablo walking down the street and they were looking for a drummer. That same week, we played a show and then started working on original songs for an album. The sound sort of changed and we started writing in English; and we got heavier and more powerful.

Who comes up with song titles like “F-ck You on the Floor,” “Hippie with a Credit Card,” “Suck My F-cking D-ck,” and “F-ck You All”?
Javier is primarily responsible for the titles.

Where do you want to perform?
Madison Square Garden. Argentina. Places in LA where we’re getting some radio play. Maybe Seattle. There’s a lot of good hard rock scenes that are really receptive to the kind of stuff we’re doing.

Radio?
Javier knows the stations. We actually did an interview I think for Argentina, where they played our whole new CD and interview between songs. The interview was in Spanish and I don’t speak so I only know my part, But yeah…

Who are your favorite bands?
I love ’80s rock, Guns n Roses, Metallica, Tesla, Pantera… I listen to jazz, blues, hip hop, electronic…so my influences are pretty diverse but when it comes to drumming, I think it’s fun to get out there and just rock.

Shout outs?
Shout out to everybody who loves music, who gives everything they can for it, and everybody who follows their passion and their heart in terms of spending the time it takes to develop the skill to play an instrument and to people practicing eight hours a day who nobody knows but someday everybody will.

View all posts by Jacob Katel →