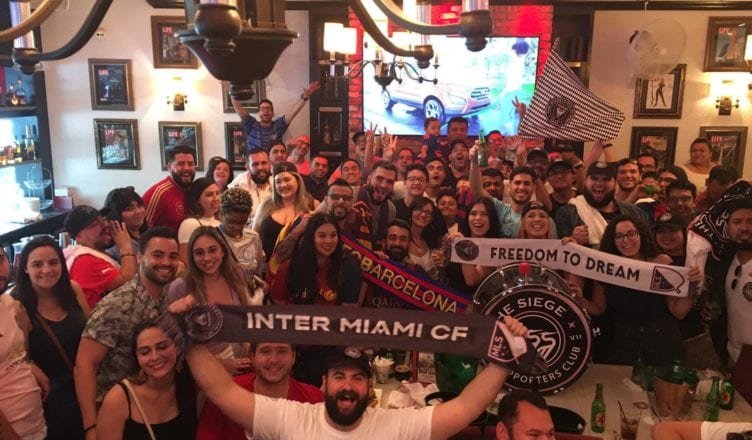 Soccer has a love/hate relationship with the city of Miami. For every European football friendly we see played at Hard Rock Stadium, we get a number of semi-pro teams popping up as fast as we build strip malls for entertainment. So when David Beckham decided that Miami was the place to put his Major League Soccer franchise, the city gladly welcomed him with open arms.

But, there was a catch.

Each site where Beckham attempted to locate his team was rejected for a myriad of political reasons. Fortunately early last year, after being humbled by Miami politicos and with the help of local businessman Jorge Mas, ‘Becks’ and Company came to their fifth and (hopefully) final spot at Melreese golf course outside of  Miami International Airport.

Although the legal battles with that site are still ongoing, supporters of this club (which hasn’t kicked a ball yet) have been here since the team’s inception way back in 2013.

The Siege – birds of a feather flock together, or should I say herons? Founded in 2013, ‘The Siege’ isn’t your average supporter’s group.

Every so often, the members get together and convene at the bar/restaurant American Social in the cozy downtown waterfront neighborhood of Brickell where they take shots with each goal that’s scored, sing chants and share their love of the game. When they aren’t singing their hearts out during a last-minute Lionel Messi free kick, there’s weekend beach outings and barbecues where each member gets to know each other a little better.

Ever since Beckham decided to pick Miami as his place to put his franchise, the supporters of ‘The Siege’ have been patiently waiting for years of hard work to come to fruition. It truly takes a special collection of people to follow a club that, for a long time, didn’t have a name, colors, or even a concrete ownership group.

The group would go years without hearing about team updates, or even stadium sites there was even a point where they thought maybe it wouldn’t happen at all.

But, they stuck with it and today with just a little over 10 months until kickoff, and with rumors that some of the world’s greatest players could be playing here, I suppose it was well worth the wait.