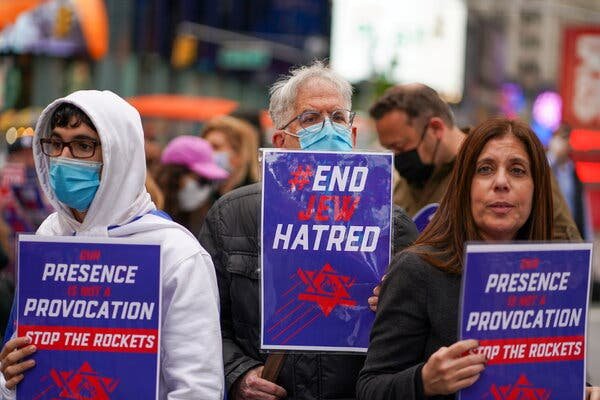 In the past few weeks, there has been a wave of social justice influencers who have taken up #freepalestine as their cause of the month. Ordinarily I wouldn’t pay too much attention, knowing they’ll move on to the next cause soon enough. However, as more  people I know have begun changing their Facebook profile pictures to include Free Palestine, or reposting articles clearly pushing one-sided narratives, it became hard for me not to weigh in. Especially when the supposedly “anti-zionism” tack it has all been taking has been directly tied to seeing the drastic upswing in anti-semitic attacks around the world.

I first posted a screenshot of a major street art festival’s infographic explaining the supposed distinction between antisemitism and anti-zionism in my IG stories with my thoughts overlaid on top as follows:

“This is what’s scary… people encouraging others not to think and instead embrace their rage and take action. Humans acting in thoughtless anger en masse is one of the most destructive and insidious forces on Earth. I learned all the stories growing up, the Holocaust, the pogroms in Russia, the crusades, and countless others throughout history. I always dismissed them as phenomena that didn’t have anything to do with my life in contemporary civilization. But here we are, not even a century after the most recent attempt to exterminate my people, and there are palpable echoes of the rhetoric used to justify violence and discrimination against us. I completely understand the desire to stand up for oppressed people, and I empathize with both the Palestinian and Israeli citizens (of all religions) caught in the crossfire of this tragic generations-long war steeped in senseless religious ideology, led by extremists on both sides. But for the first time in my life, I’ve found myself concerned for my future safety as a Jew and that alone speaks volumes…”

After posting that, I had a friend DM me,

“Really? concerned with your safety?” which I responded to and resolved amicably. But it led me to write a follow up on my personal Facebook page (including the screenshot from my stories) as follows:

“No, I don’t think I’m in imminent danger of bodily harm realistically. I’m a white-passing 6’1” male and live in a generally safe part of a minority-majority populated city. But when I say ‘concerned for my future safety’ what I’m referring to is the very real accounts (written and filmed) of increased altercations between Jews and those claiming to support the cause of freeing Palestine (forget that most of them don’t even really understand what is happening there and are just influenced by social media). These are a litmus test of the general feeling towards Jews held by the rest of the world. You can make the anti-Zionist is not anti-Jewish claim all you want. I call it nitpicking semantics so that you don’t come off as prejudiced, despite being just that. Because people who see themselves as generally good don’t like to face the fact that they share traits they vilify in others. The irony being that if they just accepted the bias and worked on addressing it within themselves, I could respect them rather than just being dumbfounded and disappointed at the unwillingness to recognize it.

And hey, I get it, despite being a tiny speck of a % of the world population (0.02%), Jews put on a good show. It’s easy to see why there’s the perception that Jews run Hollywood, the banks, and are generally successful and privileged. Because there are certainly a number of high profile successful Jews in the spotlight (for good and bad reasons). And it’s certainly possible there’s an element of jealousy from our fellow minorities linked to that perceived inherent advantage. But the truth is, Jews run the gamut from poverty stricken all the way up to the 1% just like most ethnicities.

The other truth is that as a minority group, we’ve faced displacement and persecution longer than any other, going back to our inception as a people and on through the present day. So maybe we can also just chalk it up to Darwinism and the fact that we’ve had to learn to survive in the diaspora since the time of the Romans when they first dispersed us from, you guessed it, Israel (just a tad bit before the 1948 kerfuffle). Most of your ancestors needing to find ways to survive in the face of adversity probably gives you some ingrained characteristics that help you do the same.”

So to get it out of the way:

Do I think that everything the Israeli government is doing is justified and beyond reproach? Not by a long shot (just like our own right here in the US) and I’ve said so repeatedly.

Do I think that means they don’t have a right to exist as a country, and/or deserve to be dismantled and wiped from the map? Absolutely not.

Jews fought for their right to exist independently and secured that freedom by whatever means at their disposal, despite having just had their global population decimated. Just. Like. Every. Single. Other. Country. On. The. Map. They certainly did it more recently than most, and ironically it was the land their ancestors inhabited in the first place, unlike America and most of the other countries that no one suggests dismantling for comparable (and generally worse) affronts.

But bringing it back home and away from the grander global political sphere:

Yes, I have genuine and valid concerns for the safety of my people as a whole. I have family directly affected by violence towards Jews in Israel, France, and other countries across the globe. And here in our backyard, I don’t have much trouble envisioning a dystopian future where right wing extremist groups like the Proud Boys and left wing extremist groups like Antifa find common ground in a mutual scapegoat so conveniently on the shit list for both sides (as has literally happened countless times throughout history, and across the globe).

And so yeah, I think about my family, myself, my daughter, and what this world will look like for us in the next year, and the next decade. If the war is still raging on (some people really forget so easily that it’s a war, with two sides and infinitely complex dynamics between them) between Israel and the Arab nations that surround it, at what point does it become enough justification to start taking out your anger on me personally?

Despite having gotten into lengthy debates

with several people over this issue in the past few days, I only encountered one person with an opposing view who could contradict me using logical arguments that included a proposed solution to the conflict which also didn’t entail the erasure of Israel as a country, or concessions which would certainly lead to its destruction. Aside from that outlier, it’s always the same talking points: I don’t have a solution, but what they’re doing is wrong. Or, they’re stronger, so they have a responsibility to do better. Or, just because they were victims of a genocide doesn’t excuse them committing war crimes.

I’ve repeatedly stated my position that the Israeli government is mishandling the war (because once again, what’s happening there now is the result and continuation of a generations-long war; not apartheid, not gentrification, or any of the other words being misused by trendy internet personalities) and that I have no doubt there is a culture supporting mistreatment of minorities within Israel’s borders and certainly in Palestine by Israeli army/police forces.

But my position is the same as it is for the systemic racism, violence, and discrimination that happens here in our own country against minorities. We need to change the system via the structure it is built upon if we are going to reshape its future. Which may include totally revamping or getting rid of elements of that structure. But never have I contemplated or endorsed the destruction of the United States as a viable solution to the problem, and certainly not through violent means. America has a ton of problems, but at the end of the day it’s where I choose to call home, because we’re supposed to have the freedom to create the kind of life for ourselves that we envision.

Why then should I stay silent when I see people calling for the destruction of my people’s only “backup plan for when the shit hits the fan” on this planet? That the shit might hit the fan is not a paranoid delusion. Read your history (pick whichever objective source you like) and familiarize yourself with the many times throughout history that Jews have been persecuted on a mass scale, expelled from countries they thought of as home, and vilified. So while I might not endorse all of Israel’s politics, or want to live there myself presently (barring unforeseen circumstances) I am certainly comforted that it’s out there if I ever need it.

Why is my right to voice support for the existence of a country for my people less valid than a Palestinian supporter’s right to demand theirs? At no point, in no way shape or form have I ever said or believed that Palestine shouldn’t have independence or exist at all. And that’s in spite of the fact that in maintaining their independence they demand the abolishment of Israel and removal of the Jewish people from their land (which is me putting it euphemistically because what they really call out for is the death of all Jews).

If Palestine is given back any of their previously held territory, and all Jews willingly give up the land they (arguably certainly) currently own there, where do those Jews go? What measures do you propose to ensure that no further violence is carried out by Hamas (or anyone else from within Palestine) against Israeli citizens? What collateral do you place at stake in return for the lives that will be lost if you’re wrong when you say “as long as they get their land they will have no reason to attack Israel”?

Or take it a step further, to appease those who don’t even think Israel should exist at all:

Give all the land back to the Palestinians (ignoring the objective fact that Jews have been there throughout history including and predating the Arab control of it). What then do we do with the 9 million people (about 80% of which are non-muslim and would not be able to stay under the change of governance because they would be actually ethnically cleansed based on countless and well-documented evidence from the past)?

Will the US open their doors to them all? Do they get divided up among the world’s leading nations? How are the refugees from countries like Syria, Haiti, Cuba, Morocco, and countless other war-torn countries being treated today as they flee discrimination and hostile environments? Will you open your home to a Jewish family fleeing the land their predecessors called home for generations? Is there a Syrian refugee currently getting meals and support in your dining room? Can you blame Israelis for fighting tooth and nail to preserve what they see as their only bastion in a world that has consistently and mercilessly thrown them away whenever conditions allowed?

If you can’t present a viable solution to the above problem, I would humbly suggest you either start working on being able to, or shut up about a situation you don’t fully understand and/or aren’t equipped to address. Instead try to focus that energy on the multitude of problems plaguing the less-fortunate in your own backyard every day and try to create some positive change in this world.