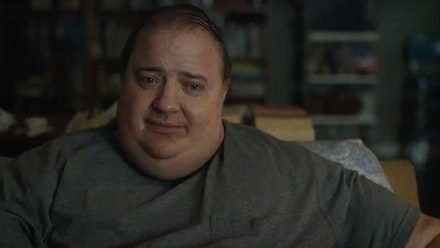 The whole film takes place in one location: a brown, dingy, dilapidated apartment made even more confining by the cinematography, which is presented in the boxy 4:3 academy ratio. Windows only seem to let gray gloom in, and the soundtrack is all ominous, drawn out, atonal strings. You’re meant to feel like a prisoner, just like the main character, Charlie (Fraser), a 700-pound man who can barely move around his broken-down apartment.

This movie is built to punish.

With its singular location and characters that seem to intrude onto a set rather than naturally enter a scene, The Whale is clearly based on a play with little or no effort given to disguising its origins. This begs the question, do these origins have to be disguised? In this case, I would say yes, absolutely. What works on the stage, in the theater, where artifice is inescapable, does not necessarily work on the big screen which has stronger ties to the illusion of reality.

It’s difficult to get swept up in the story and characters when everything looks real, but the characters and their actions are so theatrical. Charlie is supposed to be a shut in with only one friend, Liz (played with perfect caustic affection), yet characters keep somehow popping up in less and less plausible ways in his apartment to keep the narrative going. If Charlie can’t go out into the world, the world will have to come to him, apparently, even if it doesn’t make much sense.

The movie morphs from one long scene of dialogue between two characters at a time to the next. If more than two characters appear, the script finds ways to whittle it down to two again, sometimes at the expense of credibility. When Charlie’s daughter, Ellie (Sadie Sink who does angry teenager in her sleep), needs a scene alone with Thomas (Ty Simpkins, whose existence in the film never seems to be justified beyond the need for a character who can bring up religion), she drugs Charlie with Ambien so he’s sleeping in the background while they get to have a lengthy tête-à-tête in the apartment.

If there’s one thing that saves The Whale, and I can’t believe I’m saying this, it’s Brendan Fraser.

No, my disbelief is not grounded in a hatred for the actor, who is a reliably charming and welcome presence in cinema. Rather, it’s my loathing for performances that “uglify” a handsome actor in hopes of getting awards attention. It’s the ultimate in vanity when an actor seems to say, “look how horrible my normally beautiful self looks, won’t you give me an Oscar?” But darn it, even though that’s basically what’s happening here, Brendan Fraser pulls it off. Fraser’s eyes exude pathos and understanding. He oozes a need to portray extreme obesity realistically rather than to mock it.

I’m not sure if the movie itself is that understanding. True, an obesity sensitivity trainer is credited, but Darren Aronofsky does not shy away from showing the horrors of extreme obesity, whether it’s dramatic music cues underpinning Charlie’s difficulty doing things we take for granted like walking down a hallway, or the heavy thudding bass sounds that emphasize his weight. Maybe the director is simply using the tools at his disposal to express the seriousness of Charlie’s condition. But whenever I feel like being that generous, all I have to do is look at the movie’s title. Yes, the titular whale does refer to Moby Dick, which is the subject of a child’s essay that Charlie is obsessed with, but really, we know to whom it actually refers.