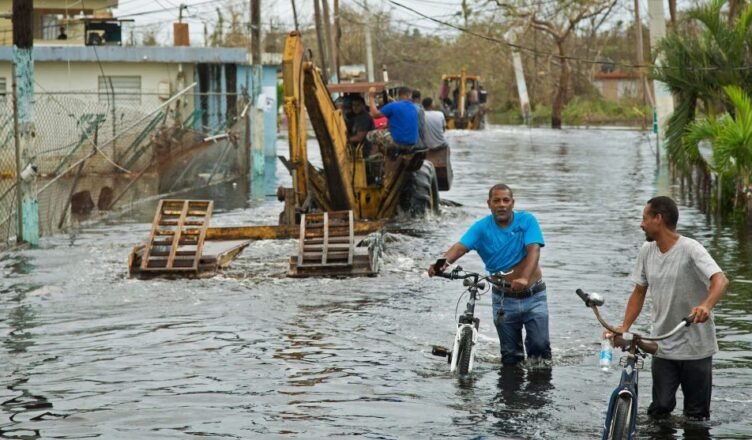 Editor’s Note: Below is an excerpt from “Tossed to the Wind: Stories of Hurricane Maria Survivors,“ written by María T. Padilla and Nancy Rosado and published by University of Florida Press. The book’s authors will be speaking virtually at this year’s Miami Book Fair which you can sign up for here.

Flying to Puerto Rico on October 20, 2017, the first thing that caught my eye was the harsh contrast of the cerulean-blue tarps covering so many homes in San Juan and its surrounding area versus the grayish brown of . . . everything. It was one month to the day that Hurricane Maria had devastated the island and destroyed its power grid, leaving more than 3 million people in the dark. In the moments just before landing, there came the immediate realization that what I and the other passengers on the flight had brought to help our compatriots and families would have little to no real impact. It would not be enough, I perceived as my eyes filled with tears. The magnitude of the devastation that Maria caused as it ripped through Puerto Rico was incalculable a month later, a year later, and even to this day in mental and emotional terms.

The sense of hopelessness was palpable but never more so than after nightfall, when the dark blue sky illuminated nothing, and there was little left to do but wait for sleep. It was in the stillness of the dark, after batteries had given out and candles had melted into wax sculptures, that people faced the loss of control over their lives. The daylight had tricked everyone into thinking that in some way, however small, they still held the reins. But it was not true. It was in the night that Puerto Ricans rediscovered that their force of will had been overpowered by the forces of nature.

Relief efforts focused on the basic requirements of food, water, and shelter. The priority of fulfilling these needs seemed to preempt another need that only now is beginning to be addressed: mental health services. And with good reason. All things tangible became a primary focus while the seemingly diaphanous was placed on hold. Nonetheless, in the aftermath of disaster we instinctively tend to repeat our experiences out loud to family and friends, trying to merge and make sense of our memories, physical experiences, and emotional states. It is a way of making sense out of the senseless. Just as important, storytelling also allows us to control and manage the chaos, if only in our minds, that comes in the wake of disaster.

Having arrived in Puerto Rico with supplies to distribute as part of a relief project called Adopta un pueblo, my coworkers and I had the opportunity to interact with communities across the island. Our experience from town to town was quite consistent. We would deliver supplies to an individual or family, and they would, with no prompting, gift us with amazing stories of survival, loss, and hope for recovery or a new beginning in the States. My coworkers and I learned that to pause and listen in the midst of handing out supplies was as valuable and important as distributing the supplies we had brought. The small gift of time from total strangers allowed for validation and the processing of feelings and emotions that might otherwise have remained an internal conversation. These stories had a profound impact on us. Inevitably, as evening fell and daylight gave way to darkness, we discussed what we had heard as the unpleasant odor of the diesel that powered home generators filled the air around us.

Mission completed, we returned to central Florida only to find the entire state preparing for the influx of Puerto Ricans fleeing the island. While I busied myself with raising funds to purchase solar light bulbs to send to communities in Puerto Rico to help combat the depression that seemed to come with nightfall, welcome centers had opened at major airports to provide thousands of Maria survivors with immediate services such as filing FEMA (Federal Emergency Management Agency) claims, searching for housing, and obtaining driver’s licenses. Chaotic at times but still functional, the welcome centers offered evacuees a sense of order, hope, and normalcy—a far cry from the frustration and disorganization they experienced on the island.

In assessing the needs of the evacuees, the intake workers of various agencies at the airports became the first to hear their stories of despair, survival, and hope. There is bravery in leaving all that you have and know to start over as a stranger in a strange land. Under more normal circumstances, the excitement of a new beginning and new possibilities is balanced by the deliberate planning for contingencies to generate a successful outcome. But these were not normal circumstances. For the many who made the decision to leave Puerto Rico after Hurricane Maria, their bravery was overshadowed by a question of survival.

Their homes and cars had been destroyed, schools and hospitals closed, and jobs lost, and the uncertainty of obtaining food and water on a consistent basis forced the realization that life on the island as they had known it would never be the same. Thus, it was not a question of choice but of how and when to leave for those whose children suffered from serious illnesses or had special needs; for seniors who had lost their homes along with a lifetime of possessions; and for anyone who felt the fatigue and uncertainty of trying to rebuild their lives amid utter chaos.

Upon arriving in Orlando, I felt the weight of the narratives I had been privileged to listen to in Puerto Rico. I became aware of a different type of narrative, a continuing narrative, of the evacuees who had journeyed to central Florida, focused more on adjustment and overcoming obstacles, while feeling resentment at having been driven from their homes, the life they knew, and the country they loved. I am convinced that these stories are part of the long Puerto Rican experience in the United States and are worthy of being documented lest they be forgotten or distorted by time.

With this in mind, I contacted my friend María Padilla, a former reporter for the Orlando Sentinel and editor of two Orlando-area Spanish-language newspapers, and suggested we collect the oral histories of those who had left Puerto Rico after Hurricane Maria in an effort to document the continuing Puerto Rican migration to central Florida. We shopped the idea around until, fortuitously, a mutual academic friend, Patricia Silver, an expert on central Florida’s Puerto Rican diaspora, pointed us in the direction of the University of Florida Press, which enthusiastically embraced our ideas. Tossed to the Wind: Stories of Hurricane Maria Survivors is the result of our efforts.

Nancy Rosado is a retired NYPD sergeant, whose disaster response experience includes 9/11, the Pulse Night Club and Parkland shootings, as well as hurricanes Katrina and Maria.