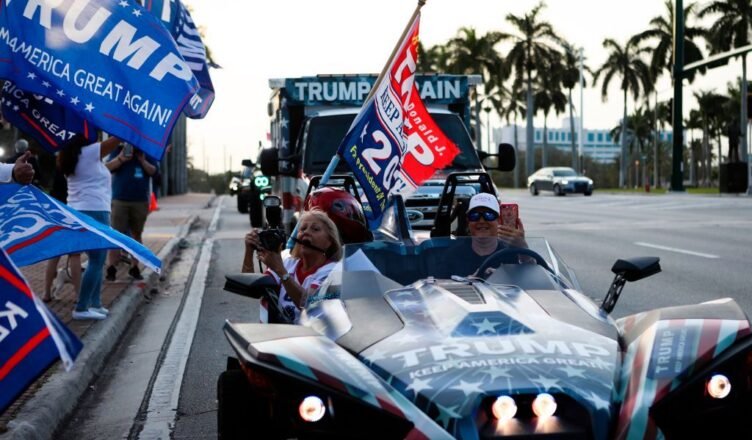 In 2016, two months before the election, I wrote an article in HuffPost about then candidate Donald Trump and his popularity in Miami.

It was a “heads up” piece to the mainstream media elite and their massive masses that their anointed candidate Ms. Clinton was not very likeable and in danger, at least in Miami, which was the case.

Fast forward four years. Now President Trump is still popular in Miami. Again, saw it with my own eyes. Today, at a Trump rally taking the form of a caravan of cars moving down Biscayne Boulevard.

There must have been at least 600 to 800 cars, not empty either, heading north, beeping their horns, draped in the American flag. Many trucks, not surprising. But this was a sign of solidarity.

The message clear as can be. We are here. See us. Listen to us.

And honestly, this form of gathering, almost a protest, is smart. In cars, you are not spreading COVID-19, a rather obvious contrast for conservative media to highlight compared to social justice protests with large groups gathering in herds. And then, the crazy happened.

The caravan, probably very strategically, moved past the Freedom Torch at Bayside Marketplace, a place where about only 30 social justice protesters were gathered.  All the beeping. Hundreds of cars backed up at a light. It triggered one of the protesters / agitators.

A protester ran into the street, ripped an American flag off a jeep, and began whipping the flag like a dirty rug against the concrete street.

The man got out of his jeep. The caravan stopped. The agitator ran and was corralled by other protesters who gave the man his flag back. This scene could’ve escalated quickly.

It is very illegal in Florida to attack someone’s car.

The man gathered his flag. Got in his jeep. And left.

Soon after like 30 cops showed up. That agitated the sparse crowd of protesters more. And eventually an arrest was made.

But the point was made. Easy to promote.

Protestor wearing a shirt saying “Stop Electoral College Enforcement” arrested after an American flag taken off a man’s jeep during a pro-Trump caravan that passed by minutes before pic.twitter.com/K7ACOG4UFc

It was such a small demonstration, the social justice protests. In contrast, the Trump caravan was huge. It was almost like they wanted to provoke the tiny crowd, and probably likely, and rather smart, same thing happened in Portland, Oregon a few days ago. You can see a pattern here. And the winner was not those on the side of social justice protests. The winners were the people in the cars.