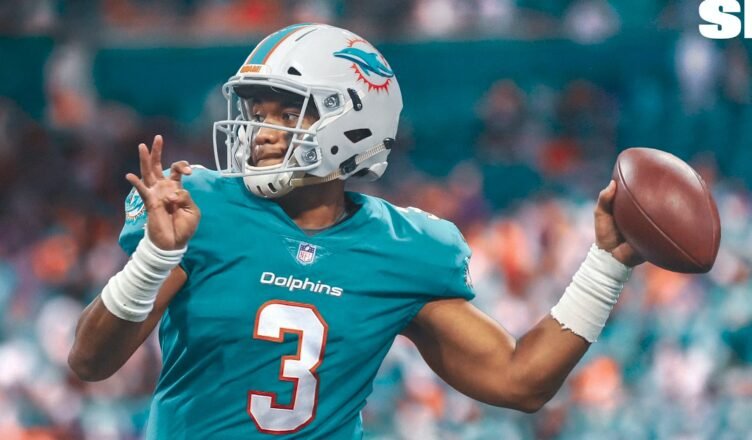 Twenty one different quarterbacks have started for the Miami Dolphins since Dan Marino retired in March of 2000. Pain, heartache, high blood pressure, and irreversible liver damage are just a few of the symptoms Dolphin fans have suffered during that span. This Sunday Tua Tagovailoa, the twenty-second  QB, will take the mantel and step into the winged cleats Marino left behind.

Tua Tagovailoa replaced journeyman Ryan Fitzpatrick six weeks into this season. That should come as no surprise, Fitzpatrick even described himself as a “placeholder” and mentor to the young quarterback. The predicament arises in concerns to the timing of the decision. Fitzpatrick has been playing well, not great, but he has lead Miami to an overachieving record of 3-3. Heading into the bye week coming off back to back blowout wins has the team feeling confident and momentum is beginning to roll downhill. The typical Dolphin philosophy would be to leave Fitz as the starter and finish in the middle of the pack narrowly missing the playoffs. Uh-0h here comes the aforementioned symptoms again.

This time  it does not seem like the  same Dolphin team, and they’ve never had a quarterback with a skill set quite like this. Tua Tagovailoa has been special from the very moment his football career began. Down at halftime in a national championship game, freshman Tagovailoa was inserted. He was stone cold but led the Crimson Tide to a come  from behind victory. Tua has an innate ability to play outside of his boundaries lifting his teammates to new heights in the process.

Fitzpatrick relies on magic and wizardry; you don’t always expect it. That portion of Tua’s games is engraved into his DNA and has been there since his inception. Performing well and wining football games are second nature to him. He has no need for tricks or hocus pocus. Miami needs a consistent playmaker at quarterback, one  who can win games they’re weren’t supposed to and that’s exactly what Tua delivers.

Contrary to popular belief now is the perfect time to insert Tua into a starting role. Miami is playing well and has an opportunity to heal while inserting a new game plan during the bye week. Players around Tua now have momentum and confidence so why not seize this energy and let Tagovialoa feed off the veterans around him? Playing Tua later in the season, when all hope seems to be lost, is a recipe for disaster as players begin to “checkout” and worry about the offseason. Coach Flores is taking advantage of a short time window when his team is healthy and playing well. Hopefully Tagovialoa can erase the past 20 years of miserable  Dolphin history from our minds and wipe the slate clean. The coaches, players, coordinators and fans are all in alignment and ready to begin our 15 years of prominence.