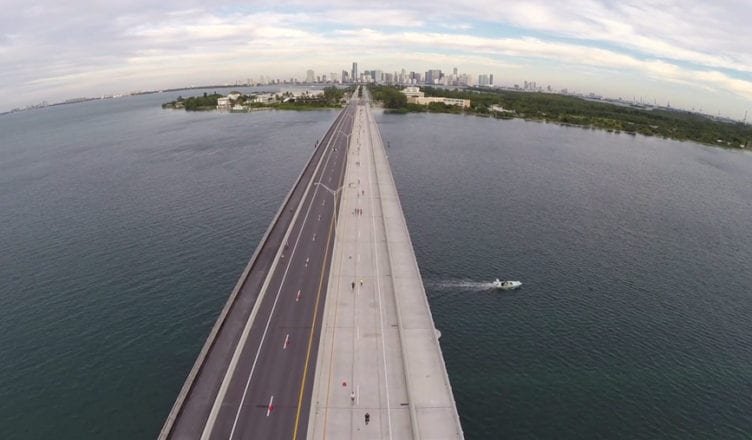 If you’re going to the Ultra Music Festival, and stay to the end, be prepared to face a 3-mile walk home over a pretty big bridge just to get back to the mainland. And then be prepared for more chaos.

To summarize the shit-show so far. Fireworks from the main stage started a fire on the pristine Key. (Fireworks have been canceled for the rest of weekend).  Tens of thousands of people had to walk home (over a 3-mile bridge) because buses and shuttles were back logged due to OBVIOUS logistics around transportation. It took some concertgoers all night to get home, after Day 1.

For the record, Day 2 is the busiest of Ultra.

The only people able to get off the island smoothly were VIP’s & artists who had their own shuttle boats. Good for them, right?

Thank you, Miami, for an unforgettable first day!!!

Funny, huh? Ultra’s media publicity company is called Get In. Maybe they should change their name to You Won’t Get Out.

We can’t confirm if Ultra wanted to go to Key Biscayne as its first alternative (there were rumors of hosting the event at the Homestead Speedway). But if they did, what a stupid idea and epic fail.

It’s logistically impossible to host such an event in a small locale, even more so during the busiest weekend of the year.

The answer is simple. Boats. More boats to take patrons off the island. They have the Marina as a transport depot, yet they only have boats for VIP’s and Artists. They need big boats and they need them yesterday. That’s the solution for next year, but we have a feeling hosting Ultra on Key Biscayne might be a one year experiment.

We also worry this shit show will resonate with residents and negatively effect other Miami festivals, such as Rolling Loud and the Miami Pop Festival. Let’s hope nothing worse happens tonight. So, if you’re going, bring good vibes. And prepare to walk. Or leave early.