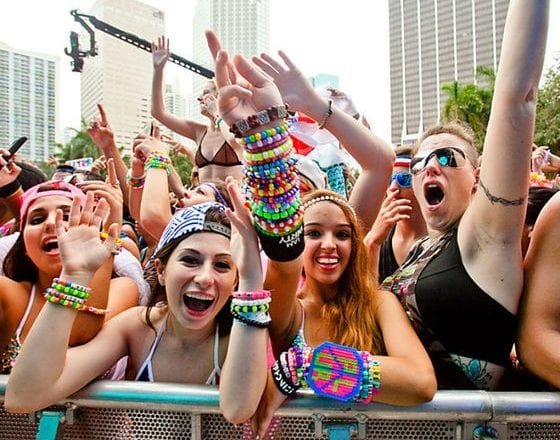 Someone thoughtfully gave us a “vitamin” which had the effect of making all the colors and sounds in the venue more vivid. It also kept us dancing until the party closed down and everyone had to vacate, only seventy-two hours later.

A motley cast of the most colorful characters existed in this phenomenon. Despite the humid heat generated by dancing, many patrons were covered in furry leggings, like a Care Bear fucked a Fraggle. And there were Native American chiefs. So many Native American chiefs. There also existed the most glorious temple of derrière. The sexiest muscular lizards.

Many wore sunglasses, some Japanese Manga backpacks… ooh I tried to stay clear of all the waves in your atmosphere… Some dancing ninjas donned face masks, as if the bird flu were nearby. The air sometimes smelled like not only sweat, but menthol, from Vicks Vapor Rub. Color exploded everywhere, in fashion; in yarn threaded hair; all over an assortment of day-glow bracelets and necklaces, not to mention glow sticks that constantly flew across the circus like the rocket’s red glare… I’m bulletproof, with nothing to lose, so fire away, fire away… and of course fireworks indeed exploded behind the main stage.

There was one girl named Molly who must’ve been the party’s organizer, for she seemed extremely popular. People continuously came up to us asking either if we’d seen Molly, or if we wanted to party with her. There was no clock in this monstrosity. Many phones were without signal inside the vortex. There was nothing to do but dance. And drink plenty of water.

We survived and marched out at the end of ULTRA like a tired zombie… i don’t even know if I’m alive, without you now, this is what it feels like… but we’d do it again in a hot second even though we were so sick we had to visit the doctor.

She prescribed us two Broadway plays

and a John Coltrane album —