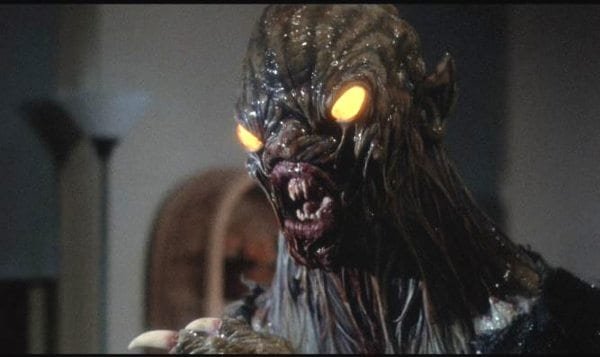 Us is writer/director Jordan Peele’s follow up to his critically lauded, Get Out, a horror film that not only made a ton of money but also won an Oscar for Best Original Screenplay last year. Us, therefore, arrives with a lot of hype, and naturally, a lot of scrutiny. So maybe I overanalyzed it, but what I saw was an entertaining horror film, but not much more.

Things begin inauspiciously. An opening shot of a vintage television sandwiched by VHS tapes—all decade specific horror movies like C.H.U.D. and A Nightmare on Elm Street, –makes the setting immediately clear: the ‘80s. As if that were not enough, the images on the TV reiterate the time period twice, “1986” repeatedly flashing on the screen. Yet, when we cut from that television to the next scene, a subtitle still appears, “1986.” Repetitive hand holding doesn’t make a great first impression.

It doesn’t help that there’s no connection between the two scenes; the TV is simply exposition divorced from continuity. It’s a little lazy, and until the opening credits finish, the film is also all over the map. In a span of five minutes we have pre-credit text explaining that miles of tunnels run underneath the U.S., a TV set showing ads for Hands Across America, a tension building sequence in a fun house (whose stinger is a bit of let-down), and opening credits imposed over a roomful of caged rabbits. It’s mysterious, yes, but also confounding to the point of disinterest.

Us straightens out remarkably after that

Switching its setting to the present day, the film’s first half-hour ably sets up the main characters and deepens the mystery, with repeated mirror and twin imagery grounding the idea that something isn’t quite right. A family of four heads out for vacation in their summer home near Santa Cruz, California. They’re led by Adelaide (Lupita Nyong’o), an overprotective mom who’s also a little distant, a little…off. Counterbalancing her seriousness is her husband, Gabe (a funny Winston Duke), the personification of a dad joke. He’s the comic relief who is able enough when it comes down to it. And before you know it, things come down to it. On an otherwise normal evening, a group of four people dressed in red jumpsuits, sharp, gold scissors in hand, appear without warning in the family’s driveway. As this is a horror movie, they don’t just stand there watching for long.

This section of the movie works best as the family battles these mysterious intruders, with each member of the clan, including youngest son, Jason (Evan Alex) and teenage daughter, Zora (Shahadi Wright Joseph), separately battling the invaders. There’s a nice sense of escalation here. Just when I thought the movie was settling into one routine, it would jump off into another. And some of the sequences are downright clever. An extended fight, for example, on a boat with an untrustworthy motor is played to great suspense and laughs.

While that showdown builds to a great pay off, it works more in theory than in execution. It’s missing something. Gore. When things get grisly, Peele holds back too much. His sequences build nicely, but they don’t have a proper release. I know, I sound like a creep and, normally, I appreciate restraint, but here it undercuts the visceral nature of what these characters are going through. Things don’t get meaty enough. The “OH!” moments end up more like “oh…”

The audience I saw it with didn’t seem to care one bit, though, and I suspect most will prefer the restraint. This is a horror movie that will play especially well for people who don’t usually watch horror movies. It’s intense, but not too intense; scary, but not too scary. And there’s a ton of humor that relieves the intensity. Of course, that humor also undercuts the movie. Outside of Lupita Nyong’o, who is grounded, morose, even animalistic, the rest of the cast is too glib, taking the violence around them too lightly.
And things go off the rails in the third act, which reveals answers to the film’s core mysteries. I’m not sure answers are even necessary, but we get them anyway. And just because something is explained, doesn’t mean it’s an explanation. Frankly, what we get here doesn’t make much sense.

Still, Peele has a remarkable visual and narrative control (except for that ending), and there is a clear attempt at thematic depth that I couldn’t pretend to have grasped in one sitting. So, while Us may not best Get Out, it’s an entertaining film that makes good on the promise of Peele as a horror auteur.