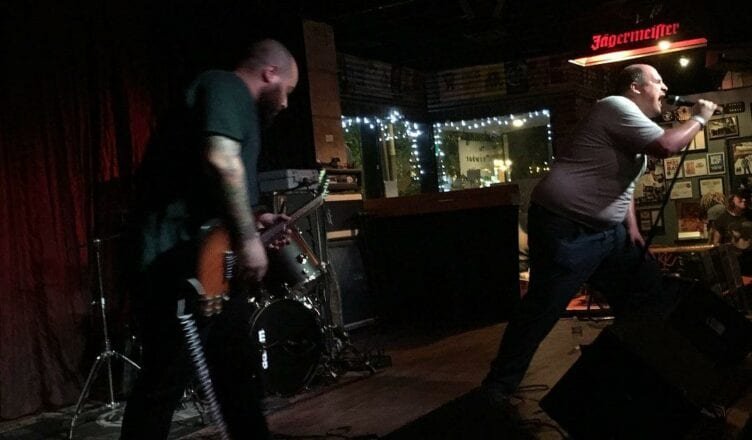 My coming across Vacancy for the first time was a matter of luck. They’d been added to a sick lineup at Las Rosas, so although I hadn’t heard them before, I knew I was in for a treat. Little did I know that I was about to have my expectations wholly mutilated, and my face blown off by blast of musical shrapnel.

When Elliot Mayo (vocals), Christian Costello (guitar), and Derek Stephen (drums) hit the stage, there was no preparing for what came next.

I was shaken by a sudden, unrelenting typhoon of sound. With music that touches on sludge and noise rock, Vacancy brings the perfect blend for fans of heaviness. Coupled with energized vocals, that remind me most of hardcore, and that are unmatched in their sheer magnitude of force.

There is simply no saying enough good things about these Bay Area boys who, with no lack of intensity, engage the room with sexy, drippy riffs like those in Empty Head. Vacancy formed in late 2016, it’s hard to believe, with such impressive sets, that they haven’t been playing many years longer. Entire venues are converts upon first exposure, and I wouldn’t be surprised to see them on an international bill because they sure as shit deserve it.

In addition to being one of the better-packaged bands from Florida, the guys behind Vacancy are eloquent, humble, and kind. Often seen supporting other local bands in Bay Area venues, Vacancy had sweet things to say about other local groups saying, “there are a wealth of heavy bands in the Florida area right now that are absolutely crushing it, and we are proud to call them peers.” They are, no doubt, within their right to say so with bands like Other Body, ta bien, and Horsewhip on their list of recommended listens.

The guys have, this year, released their Ache EP containing three unfucking believable tracks. Listen to them, and their first release, 2017s Empty Head, on Spotify. Better yet listen to them live at one of their upcoming shows.

Planned events include an upcoming house show on Monday, October 21, in Tampa. And again in Gainesville at The Fest on Saturday, November 2, alongside hundreds of other great bands.

I promise you won’t be bummed out if you make it to one of their shows, and if you do, as you should, tell em’ Bateman sent you.

View all posts by Abbie Bateman →