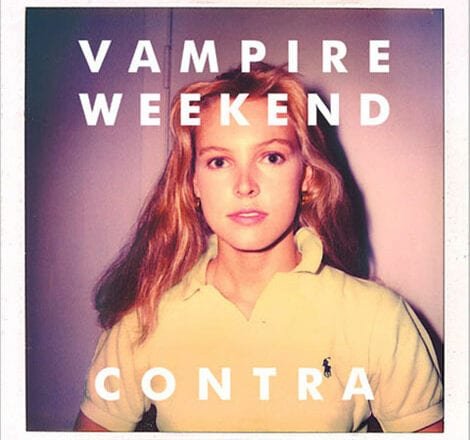 On Saturday night at the James L Knight Center, Vampire Weekend saved Miami music fans from their summer of discontent. At 8:45 Ezra Koenig all dressed in white like a Santeria priest washing away the hoodoo of no decent national acts making their way to our corner of the peninsula for the last couple months, led his seven piece band into two plus hours of their unique brand of world music.

Under the shadow of a rotating globe Koenig was flanked by a guitarist, bassist, two drummers, a keyboardist and multi-instrumentalist as  they noodled through 28 songs, only stopping  to flatter the crowd on how wonderful Miami always treated them.

The globe motif came from the cover of their new record Father of the Bride  which was the basis for a large portion of their set. On this album Vampire Weekend fully embraced  the white guys playing African rhythms as their underlying sound. Peter Gabriel  (who they once namechecked on “Cape Cod Kwassa Kwassa”) along with ’80’s era Paul Simon, and Rusted Root, seemed to be this version of Vampire Weekend’s touchstones. Those influences didn’t stop them from entering jam band territory with an extended version of “Sunflower” featuring blistering guitar solos by Brian Robert Jones and later with a cover of Bob Dylan’s “Jokerman” to finish off the main set.

Fans of their earlier music where ska was more of an influence weren’t disappointed by a note-perfect version of their first hit “A-Punk”. During the faster paced “Finger Back” the crowd jumped around enough that it seemed to shake the rickety old stands of the Knight Center. At one point Vampire Weekend even found a way to work in a cover of maybe the greatest reggae song of all  in “Pressure Drop”. The band further ingratiated themselves with the crowd by picking their encores off requests made from the audience.

Koenig promised the crowd Vampire Weekend would be back sooner than the six years between their last Miami date. Hopefully at that juncture South Florida won’t need to be saved from another musical dry spell.