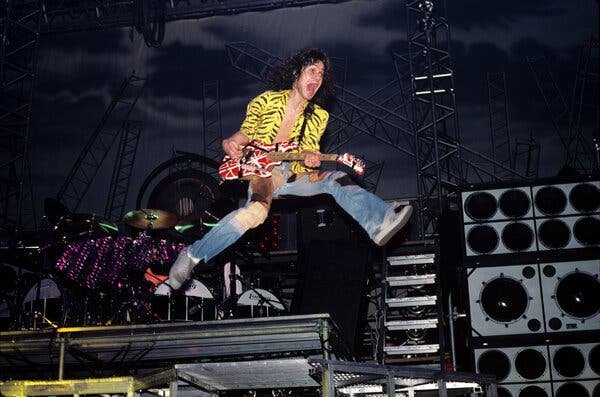 One night during my misbegotten youth I was waiting for some friends outside Bayside. It was some time in the mid-90’s. That made it a time before cell phones and I did what you did back then when sitting on a curb waiting and made small talk with a stranger who was also waiting. This dude at the corner was a divorced dad waiting for his ex to drop off his kids. He looked at the electric sign by Bayfront Park advertising some upcoming concert.

“They still have concerts there?” he asked me.

“I remember I saw Van Halen there back in ’84.” His eyes lit up at the memory. He was no longer the close to middle age guy who had been defeated by life. He was in his prime. “That was awesome. I remember we had these nuggets of weed that were like gold. They were like the color of gold.”

For some reason that conversation was one of the first things I thought of when I heard Eddie Van Halen passed away yesterday at at age of 65.

Sure there might be better rock bands than his Van Halen, but I do declare that there’ s no other band who can put a smile on your face and take you back to your youth with just an opening guitar lick. Eddie Van Halen was more than the namesake, he was the engine that inspired a hundred million amateur air guitarists. You can argue about who’s #1 and who’s #2 but the list of most distinctive guitarists in rock history begins and ends with Eddie Van Halen and Jimi Hendrix.

Van Halen’s run with lead singer David Lee Roth from 1978 to 1984  is up there as the most dumb fun six years any band might have ever provided. Rewatching their video for “Jump” the last day I realize seeing that video so many times at a young age imprinted in my subconscious what joy is supposed to look like. Roth vamps around like a stage diva in the midst of an orgasm. Drummer Alex Van Halen and bassist Michael Anthony keep the rhythm as though it energized their smiles. And Eddie shreds like the guitar is an extension of his happiness.

Unlike the Dad from 1993 I never had the chance to see the guitar god of Dad rock play live. From what I read of the on-line tributes if was an unforgettable experience. Although maybe a disorienting one, as the records show in 1984 Van Halen never played Bayfront Park, but somewhere in Pembroke Pines. Those golden nuggets of weed must have been as good at their job as Eddie Van Halen was at his.