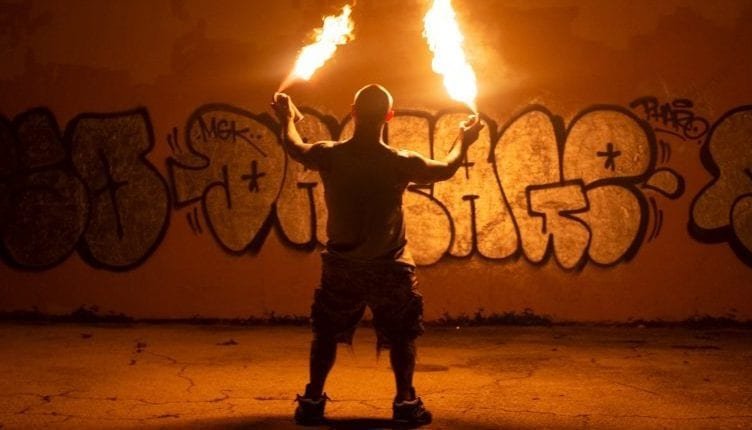 As Jose Daniel Freixas sits at The Standard Hotel, a day after premiering his film Vandal at the Miami International Film Festival  he can’t believe how far he’s come. “I used to run from the cops doing graffiti. Now I’m hiring cops to protect us while we’re doing it. Shooting vandalism with protection was interesting”

Freixas who introduces himself as JayDee, immersed himself in the graffiti world at an early age. The Columbus High School grad said he’d been tagging since the age of ten, though he was hesitant to reveal his handle, not knowing the statute of limitations for vandalism.  “I grew up bombing the streets. The craziest thing I did was climbing the green signs on the expressway. They call them heavens. People have fallen and died from up there.”

When Freixas went into film having co-produced Magic City Memoirs, he always had the world of street art on his mind. Vandal which he directed, co-produced, and co-wrote tells the story of Damage, a Miami street artist who deals with the internal and external struggle of keeping it real.  It might very well be the first feature film to be shot exclusively in Miami that doesn’t have a single scene on the beach or even a shot of the ocean or bay.  “Basel has changed the perception of graffiti. Fifteen years ago a graffiti artist was an outlaw. ”

Freixas was excited by the reception Vandal  received at its Miami Film Festival screenings.

He’s in talks with distributors, so the movie can be seen by a wider audience, as well as spinning the movie off into a fictional TV show along with a documentary show spotlighting street artists. Freixas also has a deal with Leonardo DiCaprio’s production company to produce a true crime movie starring Benicio Del Toro. But the graffiti artist in Freixas was doubtful anything could top the experience of shooting  Vandal. “We got to vandalize a Metrorail car. We were actually on a track bombing a train. With permission!”