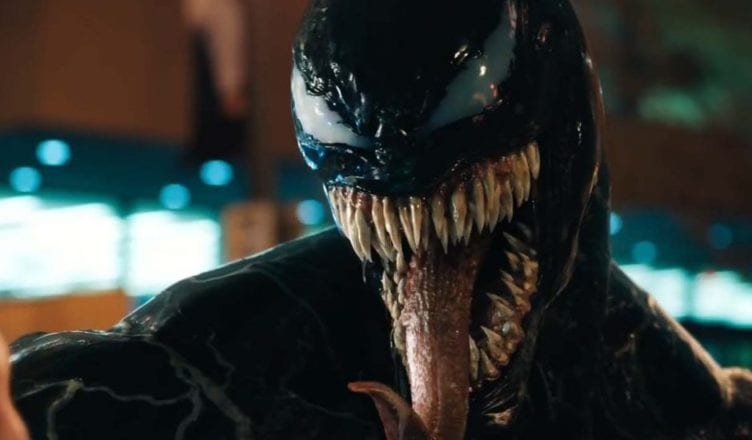 I went to dinner before seeing Venom. It was a crummy meal. Even the beer was flat. Venom is a lot like that beer.

The interview’s supposed to be a puff piece, but Brock can’t resist snooping into Carlton’s background and breaks into the computer of his fiancé, Anne (four-time Oscar nominee, Michelle Williams, slumming it), who’s law firm represents the CEO. Confronting Carlton with what he finds, a connection to the disappearances, costs Eddie and Anne their jobs and the couple their relationship.

But Carlton is doing something nefarious. One of the Life Foundation’s space excursions brought back strange alien life forms: symbiotes, slimy, sentient puddles that need a host to survive.  Eddie is accidentally possessed by one of the symbiotes. The pairing gives Eddie superpowers, but now his mind and body are shared with a vicious alien with a taste for human flesh that covers him at will with black, tentacled goo and sharp teeth. With Carlton’s experiments hinting at a bigger problem, the odd couple has to find a way to work in unison to stop the villain.

Venom Is a Sloppy Mess

The whole movie reeks of opportunism. “Eh, we’ve got this property,” Sony Pictures seems to be saying, “with a legit fanbase. Might as well throw something together to bilk those fans out of their money.” And slopped together it is. Directed by Ruben Fleischer, who did the amusing Zombieland, and the absolutely dreadful Gangster Squad, the film reinforces that his first feature was a fluke. Venom is indifferently thrown together, racing through its stupidity in hopes that the audience won’t catch on. True, it’s not the sloppiest movie I’ve seen in the past couple of months (looking at you The Predator and Mile 22), but that’s not saying much, with the half-hearted nature of project sighing through every frame.

The movie’s presented with dull digital cinematography that has only one distinction: You know that motion smoothing technology that’s in most modern televisions? The tech that makes everything look like a soap opera, adding a wonky layer of fast motion over the images? Venom looks something like that.

If the look of the movie is whatever, wait until you get to the writing. When Drake’s nefarious plan is revealed, ask yourself if it makes any sense whatsoever. Even hiding behind the veneer of comic book logic, it’s ridiculous and half-assed, disclosed in the most asinine way possible as Skirth (who I thought introduced herself as “Girth” in the movie, which would have been funny, at least) motormouths through it as if she knows it’s embarrassing.

Amazingly, it took four credited writers to come up with this movie: Scott Rosenberg, Jeff Pinkner, Kelly Marcel, and Will Beall are on that list of shame. My favorite bit of their laziness is when Venom reveals to Eddie–in a goofy, tiny CGI head that morphs from Eddie’s body and looks at him—that he knows what Eddie’s thinking because he’s in his mind. A couple of scenes later when Anne calls him, Venom says “Who’s that?” And that’s before they give us (spoilers) two completely unearned changes of heart by both Eddie and Venom, who decide to work together.

Venom Has Mores Holes in its Plot than Swiss Cheese

When, exactly, do Eddie and Venom realize that they like each other? Was it during all of those unimpressive action sequences that litter the second half of the film? Is it during the car chase, which has some energy toward the end at least, but is mostly memorable for the numerous slow-motion shots of what’s supposed to be Eddie on a motorcycle, but is clearly a stuntman instead? Or is it during the showdown with a SWAT team where Venom violently bashes the policemen to and fro, throwing them through countless glass barriers (okay, fine, I’ll admit I like glass breaking in action sequences, don’t ask me why) but is stopped short of biting one of their heads off when Eddie, from inside Venom, yells, “We don’t kill police”? A little late, no?

It all culminates in a tiring all CG showdown with another symbiote who looks little to no different from Venom (yay, imagination!) on a bridge that’s somehow even longer than the interminable runway that played host to the finale of Fast and Furious 6. At least that finale was over-the-top fun. This one’s just Zzzzzzzz.

Nothing in this movie is plausible. It’s a cynical cash-grab with little to no entertainment value. Yes, some of the back and forths between Eddie and Venom are funny, and, you know, there’s all the glass breaking in that one action sequence. But that’s about it. Not really worth 10 bucks, is it?

There are two post-credit sequences. If you can stomach it (and Eminem rapping about Venom), stick around for the first. It’s a fan service surprise that got the Venom nuts in my audience hooting and hollering. Skip the second, though, which rewards you with… a commercial.