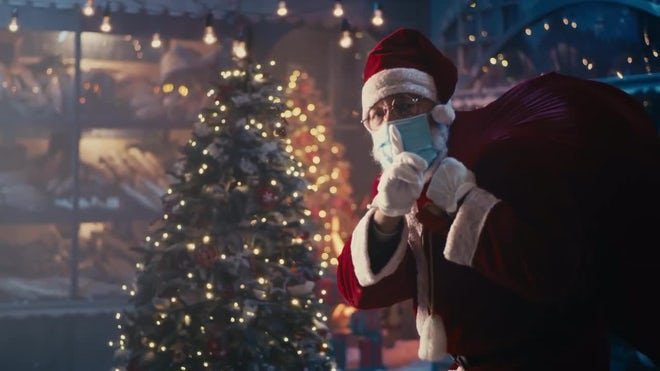 When COVID first took the world by storm a lot of people compared it to the Spanish flu of 1918. That epidemic messed up society real good for about a year and a half. So it made historical sense that things were opening up this fall, a year and a half after COVID first shut society down. People were throwing parties that friends actually showed up for again. Crowds were attending sporting events and concerts. Shoppers were entering grocery stores without a facemask.

But like a predictable horror movie, COVID came back for an unwanted sequel.

This Christmas in Miami, it seemed more people had COVID than didn’t. And on Christmas Eve they were all lined up to get tested. The line for the testing site on 17th Street in Miami Beach  snaked up and down three street blocks. The last time I got tested at the site I was in and out in ten minutes. This time I had to wait close to an hour and a half for a lady in protective gear to cram two swabs up my nose.

Some of the people I assume had symptoms or were recently around someone who tested positive, but a lot of the testing was a requirement for jet setting. Cruises required a negative test as did flights to some international locations.

As I waited my turn with a slight sense of dread I tried to tell myself this is a unique moment in time that will one day pass. Of course that was probably what people in Constantinople thought on the onset of the Justinian plague. But two centuries later there were still outbreaks. That plague outlasted them all.

But we’re a more adaptive society. Look at how quickly we’ve acclimated to covering our mouths and nostrils as though they were nipples or testicles. Two years ago a stranger wearing a facemask into a bank would find themselves arrested,  now we look side eyed at the person in the bank not wearing the mask.

If you let yourself think about it, it’s a bit depressing how quickly we acclimated to COVID. We line up like domesticated robots to have a person in a hazmat suit penetrate our noses as if it was nothing.

If we were ever going to change as a society, you’d think this contagion would be the tipping point. And for a few months in 2020 it seemed like we were coming together as a species. We stayed home for the good of each other, our ultra-capitalist government acted out of character sending us all stimulus checks simply because it cost money to exist, we marched on the streets to protest injustice.

Imagine if we put such collective energy and infrastructure from the early days of the pandemic toward protecting the environment or making sure everyone was fed and sheltered?