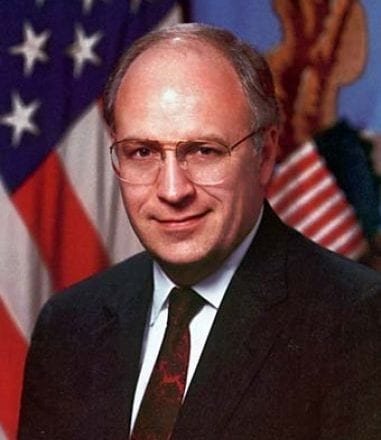 Who is Dick Cheney? It’s a simple question with a seemingly simple answer. He was America’s vice-president from 2001 until 2009. But who was he as a person, what made him tick, and what did he do in the White House for those eight years? Harder questions to answer, certainly, especially for a secretive man like Cheney. Vice valiantly attempts to answer these questions, and through its comedy via Oliver Stone prism, it answers some of them more successfully than others.

Vice is a polemic, a righteous assault on a corrupt, self-serving government, which, unfortunately, is our government. As such it’s anything but subtle. Anger rarely is. Vice works best when it uses all of the cinematic tools at its disposal to clearly lay out how Cheney and his assorted white men of power abused their influence. It’s anger is palpable and often disturbingly funny.

But it takes a while before we get to that part. Vice splits neatly into two halves with the above taking up the latter portion of the film, while the first chronicles young Dick Cheney (Christian Bale), an amoral drunk who flunked out of Yale, and his turnaround with his stern wife, Lynne (Amy Adams), by his side that eventually leads to the White House. This portion is not particularly engaging. It’s all table setting, trying to get to who Cheney was as a man. Problem is, it doesn’t have much to work with. Cheney is so enigmatic (something the movie itself admits in a funny opening title card) the movie’s never able to clarify what makes him tick. And so the movie plods along until it hits a fake out ending in the middle complete with cheeky end credits. They conclude what could have been the end of Dick Cheney’s career as a politician when Democrat Bill Clinton took over the presidency and Republican Cheney fell out of favor and considered retirement.

The credits rewind, though, and the film resets itself with what actually happen afterward. Cheney was picked by George W. Bush as his running mate and when the duo took office, Cheney abused his power exponentially. It’s this second half where the movie really picks up, becoming a searing screed, an entertaining agitprop, a righteous attack. Using title cards, breaking the fourth wall, and obvious allusions (whenever Cheney, an active fisher, “hooks” political players in his schemes, we hear water running on the soundtrack), it lays out as clearly as possible the wrongs committed by Cheney and his cronies and how they got away with it. It’s on the nose, but it is effective.

Cheney’s inscrutability means that the thought processes that led to his political abuses aren’t particularly clear. The movie never finds Cheney’s inner voice. But that might be the point. He is one note. But that doesn’t make him particularly interesting as the center of a whole movie.

And that one-note-ness bleeds, naturally, into Christian Bale’s performance. Handsome Bale, under mostly effective make-up and added weight, looks surprisingly convincing as the corpulent, balding vice president. But his croaky voice and measured mannerisms feel more like an impression rather than a full characterization. Bale never finds the soul of Dick Cheney, but, since the movie basically posits that the man has no soul maybe there wasn’t much for Bale to do but imitate the man.

Vice clearly is biased, but it’s biased against men who care more about lining their pockets than they are about what’s good for the world. And whatever his political affiliation, Cheney did some fucked up stuff. This movie just happens to describe it. Could it be more balanced? Maybe. But it’s not insufferable. Vice could have made the Democrats pure and good and Cheney pure evil. But when it does acknowledge the presence of the Democrats it’s to show archival footage of Hillary Clinton supporting the invasion of Iraq in 2003. The movie saves its most damning indictment of the “other” side by barely if at all showing the Democrats throughout its run time, highlighting their ineffectuality during the W. Bush years with absolute silence. While Vice clearly despise Cheney, it does take the time to show a more human side like his immediate acceptance of his daughter, Mary (Alison Pill), after coming out of the closet.

Yes, Vice is a polemic. As such, it’s not particularly refined, elegant, or subtle. And that means it’s not a great movie. But the way it casts a despairingly humorous eye toward our recent history makes a good portion of it go down entertainingly. We do laugh, but it comes through clenched teeth. Vice is angry. Blunt-force trauma angry. It has every right to be mad, and it does a good job of reminding us that we should be too.