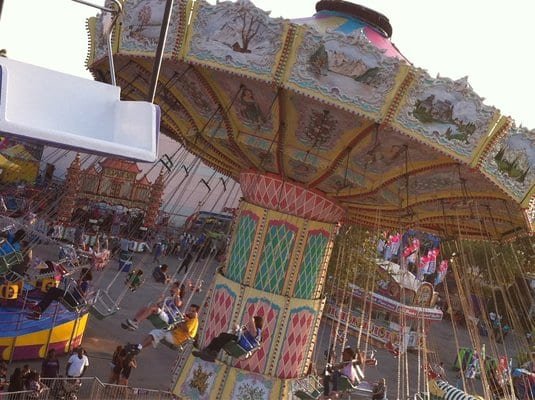 The psychologist Erik Erikson divides our life span into eight different developmental stages. While it is unlikely the German born Erikson had the Dade County Youth Fair in mind when he defined the various phases of our life, I think a visit to the grounds of Tamiami Park in March or April neatly reflect where you are on your journey toward the grave.

Growing up in the ’80’s the Youth Fair was a highlight of every Spring. I’d see commercials between cartoons on WCIX bragging about how “The Dade County Youth Fair keeps on getting better”. Teachers at school would hand out brochures with pictures of the map of the Youth Fair. I’d daydream through social studies about spinning backwards on The Polar Express.


Somehow 25 years had passed since I’d last visited what was now officially known as Miami-Dade County Fair & Exposition. We decided it was time to expose our daughter to the site that brought her parents so much joy in a bygone era. My first impression was the more things change, the more the Youth Fair has stayed the same. Prices have gone up, way up, but the geography of the fair that I spent memorizing in class rather than our state capitals was nearly identical. The kiddie section was still to the left of the entrance, the hall with all the school projects you’d try to avoid unless you had something on display was still to the right, and the scarier rides were a far walk. Many of the rides were similar to what we once rode like the swing carousel that elevates you twenty feet off the ground, the Zipper which smashes you back and forth in a tiny cage as you loop around, and the Ferris Wheel still represented.

R.I.P. to Gravitron, The Rainbow, Hi Roller,  and Mark 1 at whatever amusement park resting place they might be.

While the petting zoo had a decent array of species, the rest of the fair has even more impressive people watching. Maybe I don’t get out enough, but in my day to day life I don’t encounter some of the human beings you wait in line with for an ear of corn or a cup of dipping dots. The standout quote might have been the woman who roped in my daughter to get her face painted like a unicorn for fifteen buckaroos. “I’m going to get an energy boost. It’s a Friday night. These diet pills are something else.” I was glad to know my gray hairs didn’t make me seem like a narc. I was even more glad it was her colleague and not the diet pill popper etching drawings into my daughter’s face.

While the unicorn face painting might only last for a night, the memories and the oil that they deep fry the candy bars in will last forever.