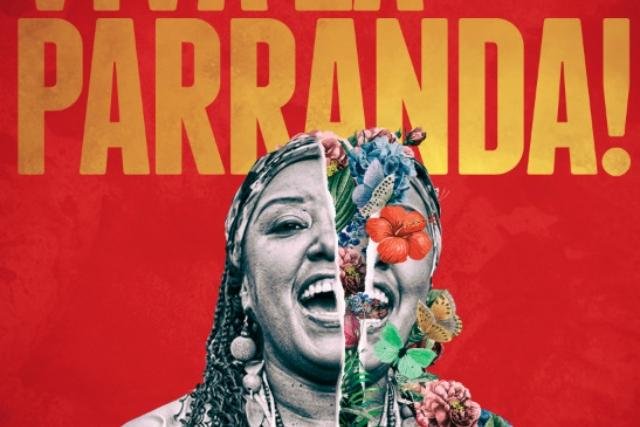 One piece of advice if you go to see the new docu-musical Viva La Parranda! playing at Colony Theatre trough May 19, don’t go in hungry. At the Saturday night performance  a huge pot of Sancocho was cooking on the stage in plain sight and smell. The beef vegetable stew simmered throughout the two hour performance of rural Venezuelan culture and even to this long time vegan’s nose led to salivation. After the show everyone in the audience who wanted a sample was given a bowl. While those with dietary restrictions didn’t take a bite, they were still fed a night of extraordinary music.

The multi-media, interactive performance introduces you to what life is like for the descendants of indigenous and African slaves who live outside Caracas. Through monologues they describe their culture, traditions, and current situation entirely in their native Spanish. As a non-fluent Spanish speaker I was dependent on the supertitles projected on the wall which could be distracting. The translations keep your eyes off the performers and the action. But even if your Spanish is shaky this is worth attending for the extraordinary voices of lead singer Betsayda Machado and La Parranda El Clavo.

Their songs accompanied  by maracas and percussion are joyful and contagious. A couple years ago the New York Times dubbed their recent record Loe Loa: Rural Recordings Under the Mango Tree, one of the best albums of 2017. Any attendee will agree the musical acclaim was well deserved. With the performers walking up the aisles of the theater singing to the crowd and later inviting a few dozen audience members on the stage to dance with them.

The show stretches out over two hours making it a bit longer than the material and attention span required, but when the music played you could have stayed all night. Viva La Parranda!  might be the first ever production that can truthfully advertise itself with the old saying, it’s all that and a bowl of soup.