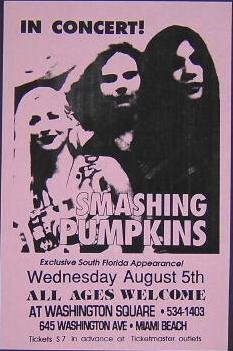 Smashing Pumpkins are now a legacy band. They just played Hard Rock Live and tickets went for up to $1,000 a seat. A few years before that they played the 20,000 seat FTX Arena.  But once upon a time they were an upcoming indie rock band coming out of Chicago, making their South Florida debut.

Thirty years ago, on August 5, 1992, The Pumpkins played a 90 minute set at the South Beach club Washington Square which had only a 125 person capacity. It was so long ago tickets went for only $7. It was also so long ago singer Billy Corgan had an impressive head of long, flowing hair.

But surprisingly some enterprising historian taped the entire concert on their camcorder. And thanks to the magic of the internet, anyone can watch it at any time. The set is heavy on songs from their as yet only released album Gish, though a couple early versions off their classic breakthrough Siamese Dream like “Disarm” and “Hummer” also make appearances. It’s impressive how many of their Miami fans already knew all the lyrics to sing along in spite of them yet to receive MTV or radio airplay.

Below is the full set list and below that is the video. Enjoy this trip back to the distant past.