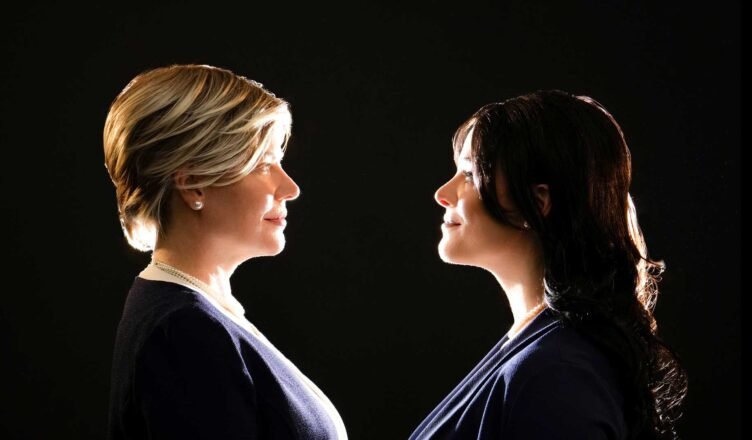 When Monica Met Hillary is the latest world premiere biographical production by the South Beach theater company Miami New Drama. The play arrives in time for Women’s History Month, no coincidence the cast and crew is (almost entirely) free of Y chromosomes.  Following up on A Wonderful World, a full-blown-epic musical about the life of jazz great Louis Armstrong, MND toned back its scale from a cast of forty plus down to a quartet of strong actresses performing dramatic vignettes.

We see Monica revealing the affair to her mother. Huma and Monica as bright eyed interns. Hillary Clinton reacting to the scandal from the start. Monica’s understandable depression. Hillary’s political ambitions and subsequent campaigns. Monica’s redemptive Ted Talk. Huma and her scandalous, criminal husband.  And on through the timeline leading up to the last scene, a fictional confrontation (set in the future) between Hillary and Monica.

All four actresses delivered. Kyra Kennedy as Monica Lewinsky, whom we see grow the most, from a starry-eyed 22 year-old intern, aloof, free-spirited, insecure, into a woman trying to reclaim her voice and name. With the help of her mom, Mia Mathews’ Marica Lewis, albeit a tad enabling, always there for her daughter.

Danielle Skraastad completely carried the gravitas of Hillary Clinton. And Rasha Zamamiri was great as Huma Abedin, whose autobiography was just released.

The play, aptly directed (Margot Bordelon) was fast paced, far from boring, and over before most knew it.

The one act play doesn’t quite have legs, or in the least, it doesn’t deliver too much. It’s devoid of tone. It’s not funny or sad or suspenseful. It’s dramatic but not cathartic let alone revelatory. The fast pace is captivating but also choppy.

The subject matter is also extremely complicated. Hillary Clinton and Monica Lewinsky are polarizing figures. They are unfortunately forever entangled in a knot. A knot not (double-negative pun intended) tied by their own doing. Or is it tied by their own doing? This ugly, ugly knot. Of which this play doesn’t untangle.

There are also creative liberties added to the character’s — such as making Hillary Clinton a cigarette smoker — that threaten the integrity of the biography.

And some unanswered questions such as how exactly did Monica and Hillary wind up meeting exactly?

There’s an old saying from the 2002 film Adaptation, “You can have an uninvolving, tedious movie, but wow them at the end, and you’ve got a hit.”

The film ends with a literal hit, a car crash.

When Monica Met Hillary ends with a fictional panic attack.

When Monica Met Hilary is playing at the Miami New Drama until March 27th.

As always, when reviewing performance art or music, I speak to many people and mash their opinions into a composite review.