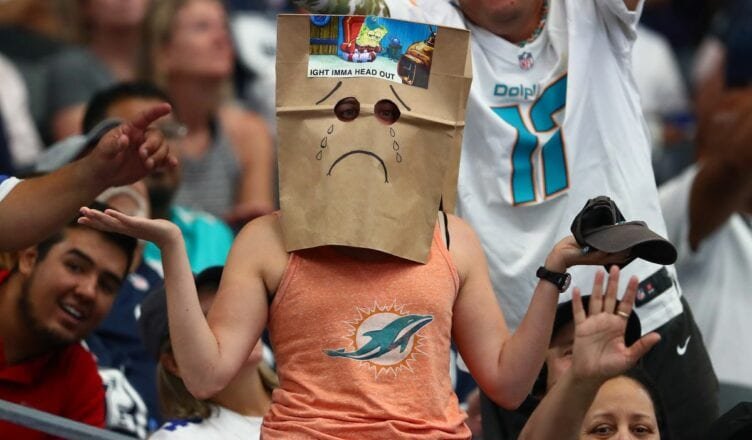 In case you’re not yet aware this year’s Super Bowl will be held in Miami. You will soon be aware of this fact as tens of thousands of football fans will descend upon South Florida.  There will be concerts, parties, exhibitions. It will be like Art Basel for meatheads.

But beyond the festivities there will also be the big game of Super Bowl LIV (that’s Roman numeral-ese for 54 and not a corporate sponsorship for Club LIV). Unfortunately our beloved Miami Dolphins will not be eligible to play in this championship game. Like the Groundhog Day of February 2 on which  Super Bowl LIV will be played, Dolphin fans will once again have to find a team to root for. Here in order from least to most palatable to Dolphin fans are the playoff teams you can feel comfortable to cheer on.

Do not root for  under any circumstances.

12. New England Patriots- Last year we could make a compelling case to support our hated division rival. But after getting caught cheating once again, the defending champions have proven themselves to be the athletic personification of Donald Trump. Corrupt in the most bumbling, obvious ways and yet still unfailingly successful. Rooting for the Patriots to win is like cheering on global warming.

Their victory will cost us.

11. Houston Texans- Much as we wish former Dolphins and current Texans Laremy Tunsil and Kenny Stills success, we traded them to the Texans for a 2020 first round pick. The better the Texans do in the playoffs the less valuable that pick will be. If the Texans win the Super Bowl that pick will plunge down to #32.

10. Seattle Seahawks- If the Seahawks earn another Lombardi trophy it will probably be because of quarterback Russell Wilson, who the Dolphins could have/should have drafted instead of Ryan Tannehill in 2012.

9. Baltimore Ravens- Ditto with Ravens quarterback Lamar Jackson who the Dolphins should have/could have drafted in 2018.

8. Green Bay Packers- Ditto with Packers quarterback Aaron Rodgers who the Dolphins should have/could have drafted in 2005.

7.  New Orleans Saints-  Watching the Saints win might hurt the worst. In 2006 the Dolphins could have chosen Drew Brees or Daunte Culpepper as their quarterback. Of course the Dolphins selected Culpepper as Brees went on to break every NFL passing record and a Super Bowl. If the Saints make the big game you know the announcers are going to constantly remind us of this goof-up. “Just think Troy, right now Drew Brees could be leading the Dolphins instead of the Saints to a hometown Super Bowl Victory.” “That’s true, Joe.” I’ll pass on hearing that dialogue eleven times.

6. Buffalo Bills- There was a time Dolphin fans hated the Buffalo Bills more than anything in the world. They always, always beat the Dolphins. That time is so long ago, that anyone under 30 would have no memory of the Bills making four straight Super Bowls from 1990-1993. A Bills victory would be a good lesson in the power of forgiveness and offer us hope that one day the Dolphins too can climb out of the AFC East cellar.

5. San Francisco 49ers – The last chance the Dolphins had to win the big game it was the 49ers who took them down. But that was back in 1984, so long ago its hard to hold onto that hate. San Francisco also offers a decent blueprint fro the Dolphins to climb from worst to first.

4.  Minnesota Vikings- The Vikes have  never won the big game. They were even kind enough to lose to the Dolphins in 1973’s Super Bowl. I remember one year when Miami had Ricky Williams a Vikings team that had nothing to play for kept the Dolphins out of the playoffs, but other than that Minnesota seems to be a likable enough group of losers to adopt.

We are the real champions.

3. Philadelphia Eagles- In early December the Dolphins somehow beat the Eagles. So if the Eagles are the champs Miami fans can say we’re the real champs. Of course the same argument could be made if New England wins the Super Bowl since the Dolphins beat them.  So never mind.

2. Tennessee Titans- After cheering on Ryan Tannehill for the previous seven seasons, it would be obvious to root for his new team. As an added bonus long time Dolphin Cam Wake sits on the Titans bench in injured reserve and would also get a Super Bowl ring with a Titans victory. But if the Titans win would it cause an existential crisis in Dolphin fans? Is our team cursed to wallow in mediocrity forever (or as long as Stephen Ross owns the team)? If another team had drafted Tannehill would he be on his way to the Hall of Fame? If the Dolphins had drafted Russell Wilson or Lamar Jackson or Aaron Rodgers or signed Drew Brees would we have ruined them? Better not to think too deeply about that which having to call Ryan Tannehill “Super Bowl Champion” would force us to do. So instead root for…

Who Dolphin fans should root for in Super Bowl LIV.

1. Kansas City Chiefs- The Chiefs have gone even longer than the Dolphins without winning a Super Bowl. Their drought extends fifty years to Super Bowl IV. But the real reason to cheer them on is evident in t the video below. Watching Coach Andy Reid win the ultimate game could provide us another example of ultimate bliss.