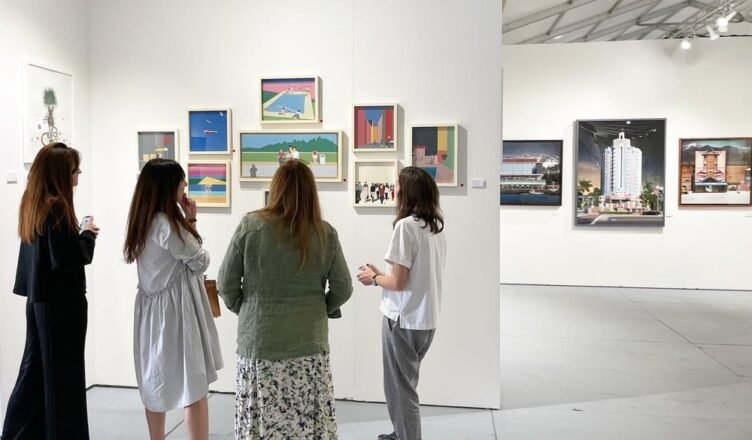 Wolf & Nomad is a gallery currently based in the Design District since 2018.

In 2023, they are planning to relocate to Little River. Run by director Asa Wolf, and specializing in Latin American art, Wolf & Nomad is thee quintessential example of Miami’s new art movement truly growing and evolving.

Mr. Wolf is filled with a vision for Miami’s future, one where there is a collaborative movement, interactive and new. It’s refreshing to hear his optimism, as someone who has covered the rise and demise of Wynwood. But we welcome his energy!

The Jitney caught up with Asa Wolf at Scope Miami Beach 2022 for a wonderful interview with an eloquent man who couldn’t have been nicer and more gracious.

Jitney: What made you choose Miami to do business?

Asa Wolf: Part of the reason we chose Miami was coming to Art Basel for many years. Since around 2009, I’ve been coming down from New York for Miami Art Week and I got so inspired by seeing the creativity. This explosion of new ideas and cultures from all over the world clamoring to be a part of this movement. That definitely influenced my decision to move down here.

I also lived in New York for 10 years and winters. I couldn’t do another winter in New York so that definitely helped as well.

Jitney: Was there a Wolf & Nomad in New York?

Asa Wolf: No. So, I was working in the auction world. I worked for Christie’s for several years. I also had a non-profit art organization called Emerging Collective. It was a lot of fun, a lot of work, but I realized my passion was to help emerging artists and mid-career artists from other countries. To help them find their place and footing in the US and European markets. And that’s why I started the gallery.

Jitney: Do you have a specialty in art and artists you represent?

Asa Wolf: We’re specializing in lots of Latin American artists. We have artists from Mexico City, Columbia, Argentina, Peru and a couple other countries. There is a strong mixture of everything from mixed media works on paper, to pigment on textile, to acrylic on canvas, to oil on canvas. We have this photo montage artist, Luciano Denver from Argentina. He does compositions that are thousands of images where he’s shooting on location and different parts of the world. And then combining his own digital images to create a false reality. It’s kind of this elevated version of photography not many people are doing. I like all different types of art. I feel it’s good as a collector to be well-rounded and not focus on one style or one medium. So yeah, I like it all.

Jitney: You’re really easy to talk to. How has your Scope experience been this year?

Asa Wolf: Scope has been great. We’ve been doing this for three years. We typically have sold-out shows with almost all of our artists. This year is no exception. We’re on Saturday. We still have two days of a fair and two of our four artists have completely sold out. So, we’re having a great week and very excited for our gallery.

Jitney: Talk about the relocation to Little River.

AW: The Design District is changing so rapidly. It’s becoming this place, so beautiful and well done, but it’s pushing out smaller businesses. We can’t afford the rents and they’re bulldozing old buildings to make, you know, luxury restaurants and retail shops. So, we think the time to go is now. Little River is this burgeoning art district we think is very authentic and cool. We also want to collaborate with other galleries and artists who have studios there and do fun art nights where you can bounce around drinking wine, having shots with artists and go to a couple places and just instead of going to just one show and so that’s kind of why we’re moving there.

Jitney: Can you talk to me more about that vision of collaboration with other galleries? How would it look and when it would happen?

AW: We’re hoping in 2023, maybe this spring, to move out there. And we’re hoping to maybe once a month have a Thursday night art night, where you can start at one gallery at six pm and end up at another by eight or nine. Just kind of get various shows under one and one area of the city, kind of like what we’re doing at Art Basel. Everyone has so much fun hopping around here.