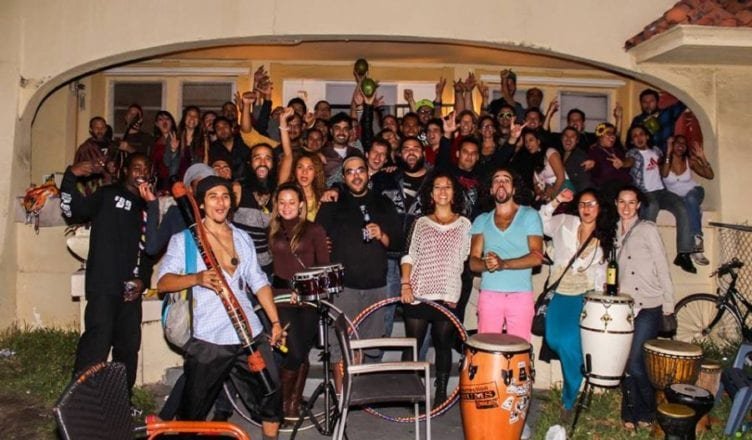 We first wrote about Words & Wine in 2011 for the Miami New Times. The event was already a gypsy open mic, floating from venue to venue, hosting some of the coolest, trippiest gatherings in the city. At the time they were at the American Legion Hall in Little Haiti.

OMG those events were crazy.

Want to read about it?

But Words & Wine goes back further than that. It used to be at this girl’s house on 27th & Biscayne Blvd. People would gather in her living room and hang outside on the porch, smoking weed, playing drums, drinking, dropping rhymes and poems. It was dope. It started there.

At that girl’s house.

That girl is named Nikki Rodriguez. The house is no longer in Miami. It’s an empty lot. And pretty soon Nikki won’t be in Miami either — she’s moving to the West Coast to raise a fam.

Wednesday night at Las Rosas (the 88th venue that has hosted Words & Wine) we kid, not that many — was Nikki’s going away party.

In 2016, Nikki told our colleague David Rolland in the Miami New Times a few words, “Through the years it has changed, but it has always had a following. The amazing thing is it has all been word of mouth. We never once had to create a flyer.”

Change is again a keyword for Words & Wine.

But Words & Wine isn’t going anywhere. Only its mama is. And that mama ain’t yo mama, West Coast. West Coast got their own Nacho Mamma’s.

Words & Wine is legitimately responsible for a large section of Miami’s counterculture, at least for the last ten years, interesting times!

So, head west, young lady. Tell them Miami ain’t what they think (partly due to your grind). And we love you for it!