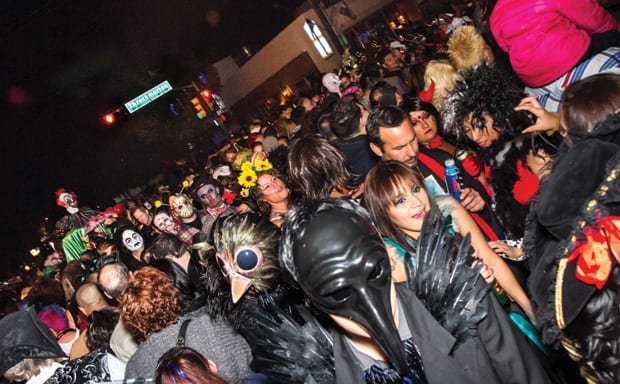 A Wynwood Halloween is the perfect holiday for Miami: get dressed up, pretend you’re someone else. We’re actually really good at that.

Still, how dope is Halloween? We love it. We celebrate it for  a week. Who are you? Is that your costume? Can we get a picture?

All the laughs, jajajajaja.  All the power in the world to those who put themselves into a costume and character and go for it.

It’s a day of role playing. A day to keep the spirit of youth alive and at the same time let out your freaky side.

It’s a day for kids and a night for the young at heart. And fare thee well to the bygone days of Halloween in Coconut Grove. Even Lincoln Road and Brickell must be feeling it because Wynwood has planted a flag on this holiday and it might be here for years to come.

Gotta say, it gets a little ugly after midnight and fast.

Guess that’s the point of the day of the dead.

And Wynwood’s kind of dead, believe it or not.

Wynwood Halloween once belonged to Coconut Grove.  Not anymore.

Never, other than maybe Art Basel, have more people haunted the streets of this once hip neighborhood. There must have been over 40, 000 people in the district. They blocked NW 2nd to accommodate the chaotic Walkers.

Wynwood Halloween, Swarm and The Purge

Most of the bars had lines around the block, but, at the heart of the debauchery was no doubt the Swarm block party on the Mana front lot off 23rd street. All sectors of the Swarm hive were active.

The Deck with its own deejays and sexy women in cages; Thrifter vending just packed to a hilt; the  main stage was nutso and of course food and drink concessions, which Swarm is crushing.

Swarm had a buzz and the bees came out.

But like most Swarm events, it’s a cookie-cutter, wash, rinse repeat recipe, nothing fresh. More like Pitbull Miami than cool culture.

But Swarm is what it is. You get what you pay for. You want cool, meh. You want smart, no way. Want Pitbull, Hot 100, 99 jiggy jams, and a fireball shot with a Bud Light, hit Swarm. Like tens of thousands.

It’s kinda too much unless you’re sixteen years old.